1792
Aug 10th Paid interest to James Hutchinson 280 00
Aug 17th To paid Thomas Clare 1000 00
Aug 17th To paid Wm Pearce costs in the
Chancery suit 141 13
23rd To paid James Hutchinson the like 59 19
Dec 31st To paid Joseph Bird principal int.t 336 12
Balance due to Samuel Bird and which, since
His death hath been paid to his widow and
administration as will appear in Mrs Bird’s
administration account 2443 16
Title with the account general at the time of his death

Statement of the stock received for Mr Samuel Bird’s share of the legacy bequeathed to him by Mr Elias Bird’s will and the manner they have been appropriated.

Mrs Bird hath received the dividends of this stock upton July 1794 and will appear in her administration account since which she hath transferred the stock as follows:
One half therof into her own name £733 17s 4d
One eighth to Henry Bird Esq., £100 9s 4d
The like to Wm Symons Esq
The like to W H Winstone
The like to Miss Elizabeth Bird

1793 Aug
By stock interest transferred into Mrs Bird’s name £3676 17s 11d
September sold out to pay debts £1300
Mrs Bird hath also received the dividends of this stock up to 5th July 1794. I carried them to the administration account since which she hath transferred the principal.
One half in her own name £4000 0s 11d
One eighth into the name of Henry Bird, Wm Symons, Wm Winstone and Miss Elizabeth Bird each receiving £297 2s 3d

One eighth transferred to as above each receiving £164 0s 6d

1795 Aug
By more South Sea Stock transferred into Mrs Bird’s name who is thus appropriated £3019 0s 9d
One half remaining therof in her own name one eighth transferred to the like as before.

Also on the 20th Sept.r 1773 at Maidstone aforesaid was indebted to the sd plts in other £653. 2s for divers, other goods, weares and merchandise.

(Very long and involved but repetitive)

Letter to Mr R Symonds, at no. 4 Queens Square, Bristol

Jan 19th 1802
Dear Friend,
Ceylon  – 10th Nov 1801
I wrote to you on my return from Bristol now near three months since and I fear either from your urgent uncertainty of our country past office on your having proved that you have not received it. I have therefore enclosed this to a friend of mine, Mr B Biggs, Linen Draper, High Street Bristol, through whose hands you will get it. I hope by this time you have got quite of your complaints by the help of care and your surgeons and if you can make it agreeable I will be happy to see you here to spend a little time.

I will furnish you with a house already equipped. Before I left Bristol I met our friend J T Mais and suggested or requested him to sell you of my being obliged to leave it and without doing my ….

Am your friend truly yours,
M Wm Drake
Devon
Near Axminster

My Lord,
I have taken the liberty of begging your Lord’s interference in a lease the particulars of which are here detailed – after the battle of Vittoria, Lieut. Colonel Bird was left there on duty and his company (The Grenadiers) was paid by his brother for him until it was ascertained that the former was going to England about the 24th September when Major Clarke was appointed to the Company.

His brother and Captain Leech were authorised by him to settle his accounts both public and private.

The balances on the abstract 24th September were less by £106 9s, the amount of the minus credits to that period which was charged to Colonel Bird’s private account and creating to the Company account to October along with the balances to 24th September, after that the public account was signed by Captain Leech, for him, as correct and the receipts, memorandums &c to the period over to him for Colonel Bird last declaration.

The balance of his private account was sent to him as two remittances amongst which was credited the amount of our order drawn by Lt. Barry 87th Regiment for one hundred dollars on paymaster Sherlock which I counted as goods as having the money in my possession, being accepted by the latter and which I beg to leave to enclose. – On applying for the money it was refused on a plea that it was forbid by Lt. Barry in consequence for the horses (for which it appears the order was given) being claimed by Captain Thompson 83rd Regiment.

Finding I could not get the money for Colonel Bird I made him acquainted with it, as also that it would be charged by me to paymaster Boyd of the 2nd Battalion for him to repay as it was no transaction of mine whatsoever in paying the money before it was received and that he might be able to make some arrangement with Captain Thompson and Lieut. Barry concerning it.

I was however much surprised on being informed that Colonel Bird would not refund the money that being eighteen months ago and still preservers in with holding it from me.

May I request your Lord will have the goodness to assist me in recovering the amount from Colonel Bird by having it paid into the hands of paymaster Boyd on my account.

It appears by the above account that I have the sum of £512-10-11 of your money in the land for which you have a joint mortgage with your mother, Lucy, Fanny and Maria and the interest I have to pay your mother for you on this sum of £512-10-11 at five pounds per cent per annum amounts to £25-12-6 a year which I shall continue to pay to her on your account till forbid by you to do so. 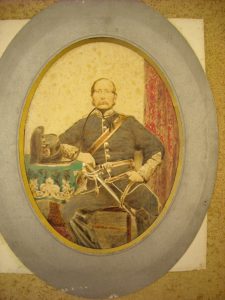 He was the son of Charles Elias Bird, Capt. 5th Foot, and Charlotte Crook of Kinsale. Married 1816.

Who with his elder brother Henry served all through the Peninsular War and in the Montevideo Buenos Aires expedition. Charles Elias wrote the diary.

These two were strong men of the army. When sent to forage they returned carrying an ox between them.

“African” Henry never married. His last appointment was that of governor of Cape Coast Castle.

In 1945 Florence Marriott wrote the following to someone:
This is “African Henry” given to me by aunt Louisa because I always admired him as a child although I never knew him.
He was my earliest hero, I love it, though mother said he looked like a “fat butcher.”

Lucy Bird all parish of Goytrey

The exact date is more than can be given (tho it might probably be ascertained) when Mary Martha, the pastor FW Durand wife woke in the middle of the night and distinctly saw the curtains of her bed drawn aside by the hand and beheld her beloved son Lieut Henry Durand stand by her and the figure one word he said – “Mother” she was not frightened but pleased to see him although he really was far distant – for he was on his return from the Mediterranean on board HMS Beller john for his Rgt., the 60th rifles had been engaged in some duty at Majorca or one of the adjacent islands.

In the morning Ms Durand began to think she must have had a dream – but sometime after sad news came that their lively young son officer, who have often said “he would like to have a short life and a merry one” was dead – and what estrayed of all was that at the very day and hour his mother had seen him at her bedside he had breathed his last with the word mother on his lips.

Lt. Henry Durand was younger than his sister Hester ja Coba afterwards Mrs de Fer, but probably older than Dr W Durands who died towards the close of the last century.

Red Lion House
Membury
Axminster asking him to collect a bust of Sam Byrde in a buff coloured coat with gold buttons signed and dated 1778. Also one half of the armorial porcelain from Bonham’s.

To dearest Petronella from daddy asking her to go to Bonham’s and collect the things.

In which is stated Mr Charles Byrde has no objection to W B Byrde having the deeds etc., but would be interested in any references to the Peninsular war, also there is conveyance and deeds relating to the litigation over property in both Leicester Square and Oxford St. Suggests they meet at the solicitors and view the paper together.