Owner the Earl of Abergavenny and containing 13a 2r 20p. 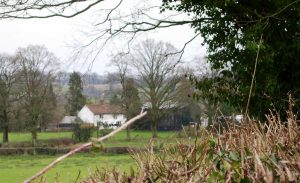 A marriage took place on the 6th April 1767 between William Prosser bach and Judith Morgan at Mamhilad church, after the wedding they lived at Gelli. They had several children, James baptised in December 1769; William in February 1771; Edward July 1774; Thomas 1776; Philip December 1779, and Richard May 1782.

In 1798 Judith Prosser paid land tax for Gelli. In 1806 Thomas Prosser was the constable for Gelli for his lease and he was mentioned again on the 1821 Barony of Abergavenny survey.

When Thomas died in 1834 the tenancy passed to Jacob Prosser, he is the constable in 1837 and in 1840 he holds the lease of land for lives called Gelly.

The 1841 tithe says Jacob is paying £1 3s 10d to the rector and the owner is the Earl of Abergavenny.

The 1851 census says Jacob Prosser is a farmer of 13a. In 1855 the Rev Thomas Evans wrote to Gabb, the Earl of Abergavenny’s agent asking him to renew the lease for Gelli to Jacob Prosser as he was a hard working man and that it’s value is £6 6s not £12 as originally thought. The parochial rate and rent charges amount to £2. The cottage and garden he valued at £1 16s and mentioned that thatch cottages are a perpetual source of expense.

On the front of the envelope the Rev Thomas Evans wrote “The bearer is a very good man – one of the oldest communicants I have. I should be glad to see him continue in the parish inhabited by so many of his forebears.”

In 1859 Jacob Prosser signed the petition against paying taxes for the widening of Newport Bridge and in 1861 he takes a lease for the lives of the Prince of Wales.

Jacob Prosser is 75 years old in 1871 and now a labourer, they are boarding William Evans 7, and Rebeka Thomas 5 months, and have a maid servant, 12 year old Jane Austin.

In 1885 Hugh Johnson was charged with stealing 3/6 the property of Mary Prosser Goytrey. He and his mother were allowed to sleep in the barn and go in and out of the house.

By 1899 a James Green was renting a dwelling house and smiths called Gelly, and in 1900 10 pigs were offered for sale by Cornish of the Gelly. The 1991 census says Charles Cornish was aged 45 and a market gardener, born in Somerset, married to Hannah for 19 years and had 6 children all alive.

David Hugh Morgan of the Gwynedd was renting Gelly in 1914 and when the Earl of Abergavenny held his property sale in 1918 Gelli, containing 13a 3r 20p was purchased by the leaseholder David Hugh Morgan for £350. 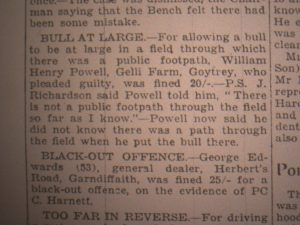