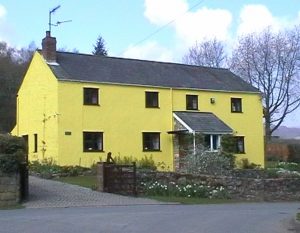 The 1841 tithe and census says the owner is Francis Davies and the occupier is Henry Edwards. Henry is aged 60, and a woodcutter, his wife Jane is 50. Living with them is their 20 year old son, also called Henry.

In 1855 a church record updated the occupier to Charles Williams, Henry Edwards having died.

I’m not able to say who lived there in 1861, by 1871 Elm Tree is called Half Way Cottage on the census and is occupied by John Herbert, he is a plasterer and tiler, he is a widower from Tregare and living on his own.

The 1881 census is difficult to decipher it looks like Joshua Attwell, but I may well be wrong, he is aged 56, an ag lab (agricultural  labourer) born in Llanvair, his wife  Charlotte is from Chirk, in Shropshire.

In 1901 Evan is aged 45, a gardener born in Radnor, his wife Eliza is 38 and born in Bryngwyn, with them on census night is 9 year old William Savery who was born in Bryngwyn.

The following advert appeared in the personal section of Free Press on June 5th 1903:

Take notice, that anyone slandering me in any way whatsoever, after this date will be prosecuted 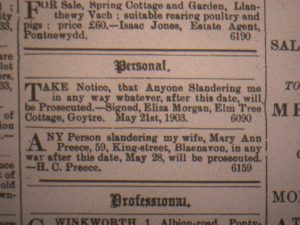 A new family had arrived by 1904, the Harry’s. Their son Richard Harry started school at Llanover in 1904.

At this time the electoral register shows the owner is William Crump, the gross value of Elm Tree is £5 14s and the rateable value is £5.

The 1910 census gives more information, James John is aged 50, a general labour born in Wenvoe, Hannah his wife is 48, born in Glamorgan. Living with them are their children, David 22, an under keeper, Richard 11 and Llewellyn 9, a scholar, all born in Goytre. James and Hannah had been married 28 years and had 12 children, 4 of which had died. Elm Tree Cottage at this time had 6 rooms.

The poor rate of 1914 says the owner is now Albert Price and Edwin Evans is the occupier.

The electoral register of 1930 gives the occupants as John James, Henrietta James, Irene and Arthur James.

The Free Press of 1931 reported the death of George Pardoe of Elm Tree, he was 68, his sister Henrietta James died in 1949 whilst living at Elm Tree, both were buried at St Mathews churchyard, Monkswood.