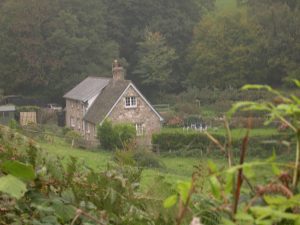 In 1775, John Jones, taylor, held the lease for Rhydlofan from the owner, John Sparrow Esq., containing wood of 2 acres, house and garden of 31 perches and a meadow of 1a 1r 4p.

There are two deaths mentioning their home as Rhickllwyfen, they were William Jones aged 72 and Elizabeth Mathews aged 85 in 1835. Both were buried in St Peter’s Churchyard.

Lewis Edmund wrote in his diary on Christmas day 1839 that he spent it at Richard Rosser’s, Rhydllwyfan.

William Jones and his family remain at Rhydlloyfan for the next twenty years, by 1861 William is aged 58 and still a mason, Ann is 48 and says she was born in Llanvair, son William is 17,  a mason.

William Jones the elder had died before the 1871 census when Ann says she is a widow and is farming 4 acres, son William is still at home with her.

I can’t work out exactly who was living at Rhydlloyfan in 1881 but by 1891 48 year old James Rowley had taken occupation with his wife Martha. The property is described as being near the boundary brook. 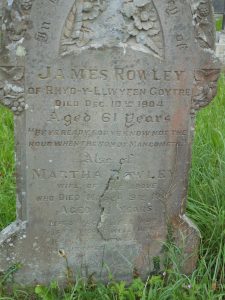 ironworks, he died in 1904 and was laid to rest at Hanover Chapel, Martha remains at Rhydlloyfan and living with her in 1911 is her son Herbert who is a milk vendor, Matilda his wife and their 3 year old daughter Catherine. Helping in the home is 14 year old niece Sarah, who is said to be a domestic servant.

Martha died in 1914 was buried at Hanover with James.

When the property came up for sale in 1918 Herbert Rowley wrote to the solicitors who were purchasing Rhydlloyfan on behalf of the Llanover estate requesting that he would like purchase the property for £300 saying his family had lived there for generations.