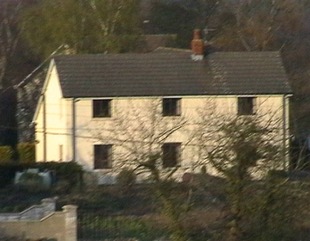 The owner of the Old Cider Mill was the Earl of Abergavenny.

The lease, in 1757 was held by Thomas Jenkins. Thomas was both a constable and overseer of the poor.

Thomas Jenkins died in 1778 and was buried at St Peter’s.

I cannot find any references mentioning the Cider Mill until the tithe of 1841 when Thomas Jones is paying 1 shilling to the rector.

Thomas Jones is still living here on the 1851 census, he is now a 60 year old labourer, born in Clytha, Eliza his wife is 53 and came from Bettws Newydd, daughter Sarah is now 15 and son Robert 9, all the other children have left home.

Thomas Jones had died by 1859, (but I cannot find where he was buried) as Mrs Jones, the Old Cider Mill, was allocated charity money from the parish on several occasions in the years 1860 and 61.

Eliza Jones, on the 1861 census was living at Rhydlofan with her married daughter, Eliza.

The new occupiers in1861 were the Coles family, George was a 67 year old labourer from Somerset, Susanna his wife is the daughter of Thomas and Eliza Jones and Cider Mill had been her family home, she is now 42, sons George 8, and Thomas 4 were both born in Trevethin.

By 1871 John Steel, a 58 railway porter from Herefordshire was living at Old Cider Mill along with his wife Hannah, 47, they also had a lodger, 23 year old William Hook from Gloucester.

Although he had the lease he was subletting to John Steel, who is still residing at Old Cider Mill on the 1881 census.

John Steel died in the autumn of 1885 aged 80 leaving Hannah a widow on the census of 1891, she is  67 and was born  in Monkswood, she had a lodger, 44 year old William Lindsay  an agricultural labourer who was born Goytre and later moved to Ton (Chestnut) Cottage.

She is living on her own on the census of 1901, a 77 year old widow. I cannot find any further details about Hannah.

I have not found anything about the property then until the 1911 census when the family living at Old Cider Mill were David Jones, a 48 year old platelayer from Cwmyoy, 47 year old Clara, his wife, who came from Llantilio Crossenny, they had been married for 28 years and had had 14 children, 9 of which had survived, living with them are three of their children, 9 year old Plezza who was born in Llanover, Herbert 5, and Phyllis 3 who were born in Goytrey.

The Free Press published the purchasers of the properties; Old Cider Mill was purchased for £330 by John Ball.

During the 1920’s I cannot say for certain who was in occupation but there is an inquest for James Ball in 1927, James was a milk vendor, living at Cider Mill and was found in a field near Goytrey Hall with his horse and cart alongside him, in a painful and distressed condition, apparently suffering from a heart attack from which he died a few days later. (Full story in Inquests.)

On the electoral register of 1930 at Cider Mill is Doris Irene Ball, who, by 1931 had married Raymond David Jones and were residing at Cider Mill where their first child. Doris Irene May was born and baptised on the 25th February 1931.

There is no one listed on the 1939 register and likewise on the 1945-6 registers but there have been several different families living at “The Mill” but I cannot confirm it means the Cider Mill.