Pontypool 4 miles. Abergavenny 6.
Genuine unreserved sale of the choice and neat collection of farming stock, comprising:-
25 excellent Hereford and Shorthorn Cattle
Pure Bred RIR and WW Poultry and Poultry appliances.
Morris Cowley Car, Rick of Hay, a few lots of well-kept implements.
Rennie, Taylor & Co., have been favoured with instructions from Mr T Davies who is giving up farming, to conduct on Thursday next, Mar. 19th at 2pm.

House and garden, with or without meadow,  on Pontypool-Abergavenny main road. – Edgar, Goytrey, near Pontypool.

Goytrey Man Who Loved his Garden

The death occurred on April 13th, after a short illness at Ellersley, Goytrey, of Mr William George Sansom.
A native of Wareham, Dorset, the deceased had been in delicate health for some time, but this did not prevent him from devoting all his energies to gardening- a hobby he was passionately attached to, especially flowers.
Although of an unassuming and quiet disposition, deceased had, during his comparatively short residence in Goytrey, gained friendship of everybody with whom he came into contact.
Much sympathy is felt for the widow and family in the loss of a devoted husband and father.
The funeral, a private one, took place on Friday last, in St Peter’s Churchyard, Goytrey. 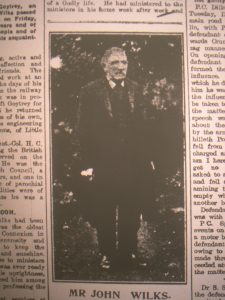 Born at Penpellenny, Goytrey on April 9th 1842, Mr John Wilks passed away at his residence there on Friday April 17th 1931, full of years and of honour amongst his own people and of good repute amongst all of his acquaintances far and wide.
Mr Wilks has spent a long and active life and won the affection and esteem of a large number of friends. The son of a smith he commenced work at an early age, as was common in those days of his youth and his first job was on the railway at the time when bridge work was in progress.
At the age of 22 he left Goytrey for Pandy but at the age of 24 he returned home to start a small business of his own from which developed the engineering works of Messrs Wills & Sons, of Little Mill.
For about 60 years Mr Wilks had been deacon at Chapel Ed – he was the oldest deacon in the Presbyterian Connection in the County and by his generosity and loyalty he was able to keep the work going through storm and sunshine.
The funeral took place last Monday afternoon and was attended by a very large number of friends of the family from far and near.

Goytrey Woman Death After Operation
The death took place on Thursday of Mrs Arthur Jones, Goytrey, following an operation for appendicitis late on Saturday night.
Much sympathy is being shown to the bereaved husband, who has been the respected licensee of the Goytrey Arms for the past six years or so.
Previously Mr & Mrs Jones resided at Talywain – at the Golynos Hotel.
The deceased lady was making a satisfactory progress at the Royal Gwent Hospital up to Wednesday when a sudden relapse occurred, due, it is believed to the terrible thunderstorm that night.
She was of a very sympathetic disposition and her early demise will be regretted by a large number of people.
Funeral at Varteg, full report in Free Press June 5th issue.

Large funeral at Monkswood. The funeral of Mr John James of Elm Tree Cottage, Pengroesoped, Goytrey, who died on Friday at the age of 68, took place at Monkswood on Tuesday. There was a large attendance of sympathising friends, the Church being full.
Mr James, the husband of Mrs Henrietta James, passed away on June 5th after a short and painful illness, patiently borne.

Mamhilad Man’s Hundredth First Prize. A high standard was reached at Goytrey and District Farmer’s Association ploughing matches which were held at Llansantffraed Home Farm, near Abergavenny.
Mr W Jenkins of Mamhilad was again successful in the championship class. This highly skilled ploughman has now won 112 prizes, 100 of which are first prizes.

Two Cars and A Flock of Sheep.

Incidents in connection with a road accident near Goytrey, Pontypool, on the afternoon of September 26th, when a flock of sheep were proceeding along the highway, were described at Pontypool Police Court on Saturday.
Harold John Vivian Williams, 19 of Red House Penarth, was summoned for driving a motor-car in a dangerous manner.
Evidence was given by Percy Thomas Nicholas, a farm hand employed at Mynachty Farm, Llanvihangel Pontymoile, to the effect that on the day in question he was walking a flock of sheep along the main Abergavenny – Pontypool road, when near the Goytrey Arms he saw a motor-car, driven by Mr Sam Lucas, decorator, of the Turnpike, Pontypool, approaching. He signalled for him to stop, which he did. He then got the sheep to the side of the road and Mr Lucas restarted. Just then the defendant’s car approached at a very fast speed. It was rocking and very nearly turned over. Witness jumped out of the way as the car passed him and crashed into the back of Mr Lucas’s car causing it to run over one of the sheep.

A Narrow Escape
Corroborative evidence was given by William George James, a labourer, of 30 Lower Cwmyniscoy, who was driving the sheep. Witness said he narrowly escaped being knocked down.
Mr Lucas stated that he saw the flock of sheep when he was about 100 yards away. The man in charge signalled him on. Just as he was about to restart he felt a bump from behind and one of his wheels of his car passed over the leg of a sheep. The bar near the luggage carrier of his car was slightly damaged and the number plate bent, a person 120 yards away would not have difficulty in seeing his car.
Declaring that he had exercised every care, the defendant said he was not travelling much more than 20 miles per hour when he saw Mr Lucas’s car ten yards away. The flock of sheep were across the road, he applied his brakes and the rear wheels of his car locked on the loose gravel of the road. He did not crash into Mr Lucas’s car, he merely glided into the back of it as it started off again and ran under the sheep under its own force.

Open to Bet
Frank Harrison, Dinas Powis, a passenger in the defendant’s car,  said that when Mr Williams passed the curve in the road the spot was blocked by the flock of sheep and the car. Mr Williams applied his brakes as soon as he could. Witness said he was willing to make a bet with anyone that it was impossible to see 120 feet away at the spot, let alone 120 yards, as had been suggested by the prosecution.
Cross-examining witness, Police Supt. Walbyoff asked him he was sincere with the bet.
Mr Harrison: I am.
Mr Isca Bowen, (clerk): We can’t allow you to break the law here. (Laughter)
Defendant was fined £2 5s and costs of 15s, the Chairman, Col. H Griffiths remarking that the Bench had not the slightest doubt that defendant was travelling too fast.

A tea and social was held for the re-opening of the Guild and was presided over by the pastor, the Rev A C Rees. Between forty and fifty persons being present.
The tables were richly decorated with beautiful flowers and did credit, not only to the ladies in charge but to those who also so generously contributed.
Afterwards games were indulged in and the signing of the Doxology brought a very pleasant evening to a close. The meetings are held on Wednesday evenings.

November 20th – In The Dark

For riding pedal cycles after hours without front lights at Llanvair Kilgeddin, three young Goytrey labourers were let off with a caution and the payment of 5s costs.
They were, Reginald Gwatkin 17, David Owen 19, and James William Marchant 20.

The funeral took place on Tuesday at Mamhilad,  of Mrs Florence Long, wife of Mr James Long, of the Goytre, late of Crumlin Street, Pontypool.