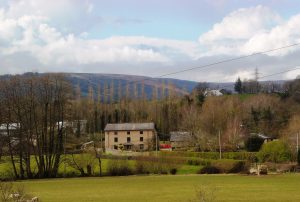 I am not sure of the owner, but in 1798 James Prosser was farming Glanwysk as the occupier and paying land tax for the late Mr Humphrey, and in 1799 James Prosser paid the overseer of the poor rate for Mr Dibdin’s land, and again in 1826 for Mr Dibdin, Lan Wysg.

In 1843 Cecilia, and in 1847 Philip Arthur, the children of William Parry, were baptised at St Peter’s.

In 1844 William Parry was the overseer of the poor for Lanwysk.

By 1850 there was a new occupier, Isaac Lewis. He, along with many other Goytre residents, signed a petition against the police on the 24th October. The owner was still John Lawrence.

By 1851 Isaac Lewis 43, a farmer of 90 acres, Isabella 37 and children Eleanor 9, Isaac 5, Isabella 5 months and three servants were occupying Lanwysk.

Again in 1859 Isaac Lewis. He signed yet another petition against paying taxes towards the widening of Newport Bridge.

Scandal hit the parish in 1873 when Mary Bevan a servant had a baby in the house, killed it shortly after being born, and hid it at the back of a bed. (Mary was the daughter of Bevan of Coalbrook Cottage, Goytre).

An entry in Penperlleni school log book says Francis Morgan has been re-admitted to school after not attending due to delicate health.