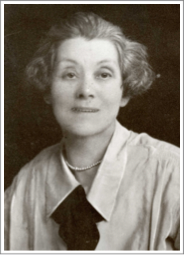 This article is from Karen, a descendent of the Scammel family of Goytre.

Annie-Louise Scammel born in Goytre in 1877.  Her mother was Alice Scammel – but she lived with her grandparents James and Eliza.  By 1891, she had moved out and was working as a domestic servant for William Evans (Wheelwright and Farmer) at New House.  By 1901 she was a servant in Trevethin.

Her grandparents – James and Eliza – lived in Goytre for a long time: they had about half of their 12 children there.  James was an agricultural labourer.  In 1861 they were in Little Castle (Castle Bach?) with 5 of their children. In 1871 the family were in LLanover Lower but by 1881 they were back in Goytre, in Star Cottage – 8 of them altogether.  In 1891 and 1901 it was just James and Eliza in Twyn Shinney.  James died in 1908 aged 90 and Eliza  was buried in Goytre in 1915 – she was 89 when she died.  They were a long-lived couple! James worked on the land all his life but his children moved to the towns to jobs in the coal or iron industries.  Not one of the 12 children stayed in Goytre.

Researching this family made me think how hard life was then.  In 1861, their eldest twin girls were not living with James and Eliza – one of the twins was working several miles away as a servant aged 12.  In 1871, another daughter was living with them but working as a domestic servant aged 11.  Only the youngest children seem to have had any schooling and most couldn’t sign their name.

DISCLAIMER – my knowledge of this family is based on BMD and census information. I have no oral information from family members.