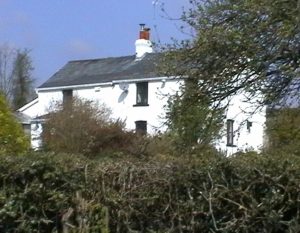 The tithe of 1841 says the owner of Upper Cae Coed is not known. The census of the same year says John Walters has a cottage and garden and is paying ½d to the rector.

The Electoral Register of 1852 says Walter David owns a freehold house and land.

Unfortunately the census of 1861 has been partially lost for the parish so fast forward to 1871 when Walter David is now being called Davies, he has gone to live with Rachel Thomas at Bwrgwm, he is 70 and still a farmer.

I have the same problem with the 1871 and 1881 census for Upper Cae Coed as I can’t be sure who was living there but by 1891 the owner is 30 year old Daniel Williams who is an estate worker, his wife Martha is 34, and living with them is Francis Davies.

There followed a notice in the Free Press for anyone having a claim against his estate to contact Waddingtons in Usk.

Upper Cae Coed was advertised for sale in April 1944, the advert says there were two 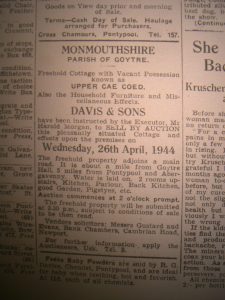 upstairs rooms, a kitchen, parlour, back kitchen, good garden and pig styes and water was laid on.

Another death occurred at Upper Cae Coed in 1951, 61 year old James Charles Jones, he was buried at St Mathews Monkswood, his wife had preceeded him.