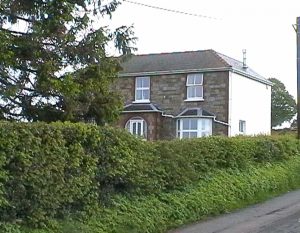 In June 1721 Thomas (Rosser) Jenkin and Mary his wife pay Roger Cadogan, parish of Goytrey, gent., £12 for a dwelling house in occupation of Edward Watkins and William John, containing meadow, freeholdland and appurtenances, part of Pellenny common, 5 shillings to be held for the natural life of Thomas and Mary and survivors of them both.

A lease dated 1761 says Thomas Jenkin, Goytrey, yeoman, and his sons, Oliver, William and John take a further lease of 21 years at £9 10s and a further £5 for every acre converted into tillage. They give up the lease in 1783.

In 1783 Theophilus Morgan of Glascoed takes the lease for the sum of £70 for a house, garden, orchard, containing 40 acres called Gwern Virick Ucha and Gwern Virick Isha, he is still holding the lease in 1822.

William Phillips is the owner of Gwern Merrick lands in 1820, late Margaret Jones lands. He is in arrears of £15 to her. The occupier of the house at this time is John Jones, paying £5 a year rent, he remains at Wern Verig until 1823 when Francis Morgan takes occupancy, but shortly after Francis Morgan is removed to the poor house, a few hundred yards down the lane.

In 1826 William Morgan esq., of Pont Kemeys pays a reduced rent of £8 in consequence of the house being let to go into a state of decay.

By the 1841 tithe the owner is Thomas Rosser and the occupier is William Mathews.

The 1851 census says David Evans, 29, a labourer from Denbeighshire is living at Wern Verig with his wife Mary and children Evan, 2 and Catherine 1 month, he remains at Wern Verig for 11 years.

On March 10th 1863 Louisa Davies of Llanover and James Waite marry in St Woolos, Newport and begin their married life at Wern Verig, James being in the employ of Thomas Evans, the rector of Goytre. Their first child, Mary Laura Elizabeth was baptised in December at St Peter’s. In may 1865 James was summoned for non-payment of £1 12s 4d to Amy Reece (of Walnut Tree, later Black Beech) for bastardy arrears.

James and Louisa’s second child William Owen was baptised in February 1865. In 1867 a further non-payment of a Bastardy order was made against James 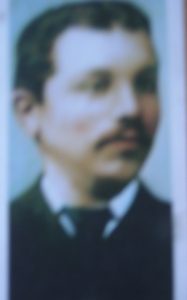 Waite by Amy Reece.  In June 1867 their third child James John was baptised and in April 1869 their daughter Margaret Elizabeth.

James Waite died aged 35 on the 20th January 1871 at the home of his brother in St Woolos where he’s buried.

The house is unoccupied on the 1871 census, the children are staying with their grandparents, Owen and Mary Davies at Tyr Ewen.

William and James Waite started at Penperllenny school in 1872.  The same year Louisa was taken to court over her little boy throwing stones at Martha Williams’s turkey (Penwern). In May the same year Louisa threw water over Martha. It was about this time that Louisa removed her children from Penpellenny school to the Rectors school in Nantyderry.

Nantyderry school log book, May 28th 1873, “John (James) Waite punished for sticking pins in Joseph Hook.” Mrs Price called concerning the conduct of the same John Waite. On the 6th June headmaster wrote “spoke to the Rector about the bad conduct of the Waites.”

In June 1873 after Louisa had removed her children from the Rectors school and placed them back in Penpellenny school is the start of the “vicar and the well” saga. The rector, the Rev. Thomas Evans, refused Louisa permission to draw water from the well at Black Beech unless she returned her children to his school at Nantyderry. (The full story is in the Free Press of 1873.)

In April 1874 Wern Verig was burnt down by a child playing with a fire brand which lighted some straw and set the thatch alight. (the photo is the new Wern Verig). This year the parishioners raised the sum of £150 to pay for the “vicar and the well court case”  so it could be  heard at Monmouth assizes.

I have not be able to trace Louisa Waite until 1891 when she was living in Oxford Street Abergavenny with James, William and Mary.