The three Old Stores properties have been very difficult to work out who was living where as on most occasions each house when mentioned was just referred to as Old Stores. 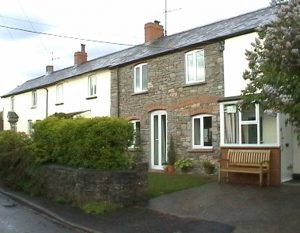 Built in the 1870/1880’s the 1891 census is when the property has it’s first family in occupation, he was Thomas Thomas, 39 and a Baptist Minister, his wife Catherine is 45, they were both born in Glamorgan.

The 1901 census has Elizabeth Evans, 40, born in Goytre; living with her is Mary 9, born in Pontypool, and Ann Jenkins 75 who was also born in Goytre.

By 1911 Horace Morgan and his family had taken residence, he was a 27 year old nurse dispenser, his wife Mabel was a music teacher, they had been married three years and had a daughter Pearl. Sadly Pearl died young and was buried at Mamhilad Churchyard.

In 1919 my Morris family took residence, Valentine Evan and Winifred Edith, the last five of their 11 children were born there, Ernest Raymond in December 1919, who died the following May, Ronald Herbert born in August 1921, he also died in September the same year, Leslie was born in August 1922, followed by Joan in September 1923, then William in November 1924 and finally Derek John in July 1927.

My grandfather, Valentine Evan Morris died in March 1928 and was buried at St Peter’s. He had served in the Welsh Regiment during the first world war.

The children attended Saron Chapel Sunday School and in the evening had to walk to St Peter’s with granny for the evening service.

Winifred stayed at Ash Cottage for many years after the death of Valentine.  On the 1939 register she is at home with her son, Edwin Charles, my dad.

Sometime during the war years she left and went to live in New Inn, I suppose as all her elder children were in the forces, the only one at home was Derek, maybe it was easier for her. She died in December 1976 and was laid to rest with Valentine at St Peter’s.

The 1945 electoral register gives Hugh Lewis as the occupier of Ash Cottage.This had changed by 1947 to Horace Davies, who later moved over the road to Bussey View.