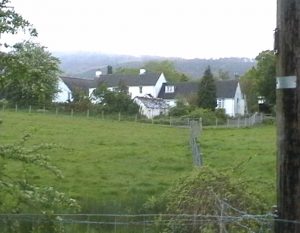 Park-y-brain was sublet several times over the years. A document in 1768 says Richard Davies of Court-y-Gollen is the leaseholder “of all that messuage or tenement or farm commonly called TUY or Tyr Park-y-brain situated in several parishes of Goytrey and Mamhilad in the occupation of Edmund Gibbon or his undertenants”.

Walter Griffith remains at Park-y-brain and is mentioned several times in the parish records as being overseer of the poor.

In 1794 his wife Mary died and was buried in St Peter’s churchyard, the final mention of Walter Griffiths is in 1802 as an overseer of the poor prior to his death in 1804.

In 1802 Richard Jones pays the poor rate for the first time for Capel Leigh’s Park-y-brain. Again in 1802, Capel Leigh has been threatened with a court order if he does not let the canal deviate through his land, he then agrees.

In 1815 Richard Jones becomes one of the trustees for the lease of Chapel Ed ( I have read that his initials are carved into the pulpit chair at Chapel Ed.) Over the coming years Richard Jones was a stalwart of Chapel Ed during the early decades, surveyor of the highways for the parish, paid his land tax, and was also an overseer of the poor.

In 1845 the lease for Chapel Ed was transferred from Richard Jones (I don’t know who to).

Richard died in 1849, in his will his son William, a woodward living in Pontymoile, and David Thomas of the same parish were his executors. He instructs them to sell his live and dead stock, also all his household goods and chattels unless Mary his wife wishes to keep some items, providing his executors agree to her request, she is also to receive 5s per week, all further monies to be in security.

After Mary’s death to be shared between his children William, Thomas (of Trevethin), Walter (Goytre), Ann (now Jenkins), Mary (now Jenkins), and Sarah.

Also to William he leaves his freehold messuage in Llanhilleth, now in the occupation of widow Morgan.

By 1850 William Jeremiah had taken the lease of Park-y-brain. He was the collector of taxes for Park-y-brain and an elder of Chapel Ed.

On the 1851 census for Park-y-brain, William Jeremiah is aged 73, born in Mamhilad, a retired farmer and Martha his wife is aged 68. By 1861 William and Martha had moved to Goytre Yard (Wharf).

In 1854 William Lewis was paying the tithe for Park-y-brain to the rector, the Rev Thomas Evans. This had changed by 1856 as William Williams of the Wharf was the new occupier. He was also a signatory to the 1859 petition against the paying of taxes to widen Newport bridge.

Edward Charles died somewhere between 1871 and 1881 and Mary Charles was listed as a 56 year old widow on the 1881 census, farming 100a, employing 2 men along with her son Joseph, 22. There is a notice in the Free Press dated the 21st October 1881 for a farm sale by the executors of the late Edward Charles.

Edward’s son William is now in control of the farm and he was aged 37 in 1891, and  born in Llanfrechfa Lower. He is married to Elizabeth and their children are Mary 10, born Glascoed, Henry 8, William 7, and Isaac 2, all born in Goytre. Their servants are 19 year old Margaret Meredith, Aaron Jayne 40 is a farm servant along with Sidney Meredith 17 who is a general servant.

Ten years later in the census of 1901 William is aged 48, a widower, farming Park-y-brain, his children are Laura 20, Edward 18, William 16 and Isaac 12. Margaret Meredith is still the domestic servant, now aged 30 and born in Mitchel Troy.

In 1909 David Thomas of Goytre was fined 10s for setting snares on Park-y-brain land in the occupation of William Charles.

Also in 1909 is the story (In the Free Press) of the badger caught on the road by Park-y-brain.

William Charles is aged 59 in 1922, and living with him is his son Edward who is 27. Working on the farm, William is 25 and it says dairy and dealer, and Margaret Meredith is still their housekeeper.

Edward Charles was fined in January 1929 for allowing his pigs to stray on the highway. Again in 1932 is the “Tale of a Horse,” court case (see Free Press, September 1932 article).

James Williams, a labourer of Park-y-brain was found drowned in the canal in 1934. 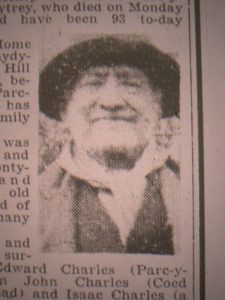 Then in January 1940 is this wonderful photograph of Henry William Charles aged 90.