Mr Edwin Jones chief inspector of the GWR who has just passed away will be remembered as station inspector at Swansea. 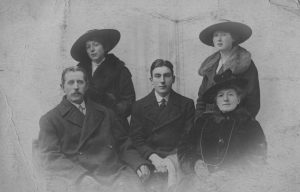 He was here during the 1880’s, at the time of the famous onset of Mr W E Gladstone, when there was in town the largest assembly of Liberals ever held in South Wales.

In 1890 he was appointed traffic inspector for the Swansea district.

He then went to Paddington as chief lamp inspector and now for the past 13 years has been chief inspector at Cardiff.

Born at a farm near Nantyderry, Mon, he began his service with the GWR at Swansea in 1872 and was promoted to Llanelly and took the responsibility for the transit of tinplate for shipment at Liverpool before Swansea became the chief exporting port.

In 1887 he was placed in charge of the train working arrangements at Windsor and while there was able to render memorable service to Queen Victoria by assisting in the capture of MacLean who tried to assassinate her majesty.

Inspector Jones held the would be murderer secure among a crowd of spectators until a superintendent of police took him into custody.

(Edwin Jones is my great-great-uncle, born at Lapstone Cottage, Goytrey, in 1857).