Roadmans was an Earl of Abergavenny property, containing a cottage, 5 acres 1 rood 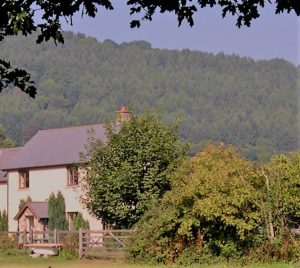 and 37 perches. The fields were Cae Cenol, Can Draw, Can Betty James, Old Orchard, a Cottage garden and a field, Little Meadow, Little Field and Car Clawdd.

The Earl of Abergavenny’s 1821 parish survey says the occupier is still John Jones, he died in 1836 aged 90.

In 1838 John Watkins took the lease from the Earl for the lives of Ann 63 and James 40. The census of 1841 says John Watkins is 55 years old and a farmer, Elizabeth his wife died in 1845 and was buried at St Iltyd’s Mamhilad.

On the 1851 census William Watkins, the son of John, is the head of the family at Roadmans, he is aged 42 and his wife Roseanna is 33, their children are Thomas 7, William 5, Ann 3, and Elizabeth 1 month. They also have a 13 year old servant Emma Morgan.

In 1856 John Watkins died and was buried alongside his wife at St Iltyd’s Church Mamhilad.

William Watkins took a further lease in 1859 at £115 for a cottage and garden with land about 5a for the lives of William 11, George 4, Thomas Thomas 5, the son of Thomas Thomas, Great House Mamhilad, the rent is 4s 6d with a heriot of 5s.

There is an advert in the Free Press on the 13th August 1896 for a farm sale at Roadmans on behalf of Mrs R Watkins of live and dead stock, furniture etc.

By 1901 David Morgan,  previously of Church Farm moved into Roadmans, he was aged 52, a farmer and haulier, his wife Martha was 57. The same year he was fined by Pontypool Court for leaving stones on the road, again in 1906 he was fined 5s, this time for allowing a heifer to stray on the highway.

By 1907 his daughter Martha had married Frank Howells and they lived at Roadmans, their children were Ethel, Elias, Henry Grant, and a daughter Gwendoline who died in November1910. The same year the gross rateable value of Roadmans was £6.

The 1911 census says David Morgan is aged 62, a farmer born in Llanbaddock, Martha his wife is 67, living with them is their granddaughter Martha Jenkins aged 17. The other family is Frank Howells 27, a waggoner, born in Hereford, and his wife Martha 28, born in Glascoed.

David Morgan aged 81 of Road Farm died in 1918 and in July 1924 Martha Morgan, wife of David died, she was 81. Two years later a daughter of Frank and Martha Howells called Frances died age 2.

Martha Howells, wife of Grant purchased Road Farm from the Earl of Abergavenny in 1927 for the sum of £275.

Martha and Frank Howells and their family remained at Road Farm for the remainder of their lives, and after they both died their son Arthur and his family lived there.

I have very fond memories of the family and spent so many happy hours playing at Road Farm with my dear friend Sandra.