In 1790 Rachel Evan held a lease from the Earl of Abergavenny for Pyddu containing, messuage, garden, orchard and 3 acres. She passed the lease to her son, William Morgan Evan the same year. The lease was for the lives of William Morgan Evan, 50, John Morgan 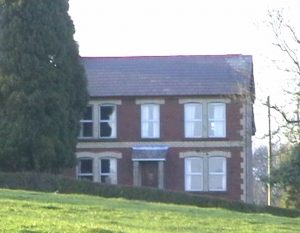 At the time of the Earl of Abergavenny’s parish survey in 1821 Ann Lloyd is renting Pyddu – a house, two plocks, pasture and a cottage.

Between the years 1825 and 1829 the church records say David and Ann Jones are the occupiers with David Jones paying 2s 6d land tax in 1829.

All changed again by 1831 and the new resident was John Watkins.

On the 1841 census Richard says he is aged 60 and a gardener, living with him is his son Henry, 25, also a gardener. The tithe of the same date says Richard is holding 5 acres, 2 roods and 27 perches and paying 15s to the rector. Richard Plaisted died in June 1843 and was buried at St Peter’s. In 1848 Mary, the daughter of Ann also died.

In 1850 the lease is transferred to Mr Thomas Baker of Abergavenny for the lives of William, his son, and Sarah and Sophia aged 17 and 14, his daughters. The same year Thomas Baker voted against the police in Goytre.

On the 1851 census Henry Plaisted is aged 34, still a gardener, he says he was born in Abergavenny, with him is his mother Ann who is now 65 and said she was born in Llantrissant.

In April 1859 Henry Plaisted took Mary Gibbon to court accusing her of assaulting him, she was acquitted. The following year, 1860, Henry took his brother William to court for stealing two bushells of wheat on the 22nd October. There was no case to answer and William was acquitted. The same year William killed a sheep belonging to Thomas James of Ty Cook for which he was sent to prison.

In 1861 Henry is aged 44, a farmer, living with him is his mother Ann aged 75 and brother William, also William Vaughan, an 18 year old servant from Lanvair.

A sale of the lease of Pyddu took place at the King of Prussia on Wednesday 14th October 1863 for a cottage, stable, building, yard and garden, three pieces of arable meadow and pasture land, containing together about 5 acres, 1 rood and 17 perches, in the occupation of Mr Henry Plaisted. The lot is held under the lease granted by the Earl of Abergavenny with a reserved rent of 5s per year.

An undated document says the rateable value for the house and land is £5 15s for Pyddu and £6 5s for Caeton ys Cubore, rented land.

Henry’s mother Ann died in 1864 aged 82 and was buried in St Peter’s churchyard.

Henry Plaisted continued to live at Pyddu and is mentioned both on the 1871 census and again in 1881 when he says he is a farmer of 5 acres, and has a 15 year old servant, Ellin Jones who was born in Goytre. Henry died in 1882 aged 69 and was buried at St Peter’s.

The Earl of Abergavenny’s property sale in 1920 gave the following details for Pyddu: