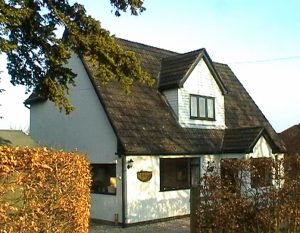 On the 1821 Earl of Abergavenny’s survey Ann Lloyd was living at Rose Tree Cottage, by the 1841 tithe John Lloyd was the occupier of a cottage and garden containing 26 perches. On the 1841 census John was aged 70 and a Woodward, living with him were Mary 50 and Elizabeth 10.

I cannot say with certainty who was living at Rose Cottage on the 1861 census, the enumerator was very vague when naming the houses and didn’t seems to follow the normal route, also part of the census is missing, so there is a gap until 1870.

An advert in the Free Press says Twyn-y-rhws is for sale and is to be offered at the Three Cranes Hotel in Pontypool; John Griffiths is the occupier, paying a yearly rent of £5. The purchaser was Thomas James.

On the 1871 census John Griffiths is aged 38, a merchant born in Llangors, Hester his wife is 34 and was born in Abergavenny.

By 1881 John Griffiths had left and William Morgan aged 29 a thatcher, Keturah his wife 27 and their three children, Flory 5, Kate 3, and Ann 1 were at Rose Cottage.

Rose Tree was sold again in 1889 by Thomas James (he had purchased Ty Cooke) to W T Cooke.

Jane Jones was at Rose Tree Cottage in 1891 but by 1894 George Roberts was on the electoral register.

Richard Rosser was the tenant in 1901, he was aged 31 a steel iron worker, born in Goytre, living with Keturah his wife aged 29 and their 3 children, Amy 4, William 3, and Rachel 1.

In 1911 Elizabeth Carpenter aged 42 a dressmaker, born in Hengoed and Rachel Jones 23, a newsagent were resident at Rose Tree.