In August 1854 John Rosser of Pantglas, miller and farmer gave to his son-in-law, John

Phillips a piece of land on which to build a house.

The following advert was placed in the Mon Merlin on Friday the 4th May
To be let, a most desirable country residence for a genteel family adjoining the turnpike road between Pontypool and Abergavenny, 1 mile GWR railway station.
Newly erected, consisting of, large parlour, 4 spacious bedrooms, back kitchen, brewhouse, pantry &c, with flowers and kitchen garden attached. Rent moderate.
Apply, Mr John Rosser, Goytrey Mill.

Edmund Lewis wrote in his diary, “at Ty Ifor plastering for John Phillips.” In 1858 John Phillips borrowed £100 from Charles Herbert  to enable him to complete the building.

Thomas James was in occupation by 1861, the census says he is 65 years old and a farmer of 230 acres, was born in Mamhilad, his wife Elizabeth is 59 and was born in Hereford, Mary their daughter is 22 and was born in Goytre. The following year (1862) their son John married a Patty James and in January 1864 their daughter Mary married John Gittens.

Lewis Edmund wrote in his diary on the 22nd January 1866 that Thomas James of Ty Ifor had died aged aged 72 and on the 27th wrote he was at the funeral of Thomas James at Hanover Chapel, but an article in the Usk Observer of the 8th February says Thomas James was 75 and died of bronchitis.

This is a photograph of Alderman Philip James of Abersychan, the son of Thomas, he was born at Ty Ifor. 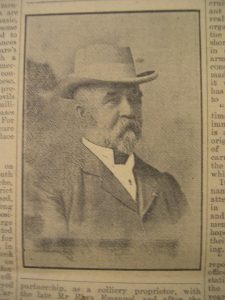 The 1871 census says Elizabeth Phillips and her daughter Ann are living at Ty Ifor, both being born in Goytre.

On the 11th May 1872 the property was sold to Charles Herbert, he purchased it from a J A Kelly, stating it had recently belonged to John Phillips, it was then once again sold to Richard Richards, a butcher from Garndiffaith. Mrs Richards sold Ty Ifor again in 1878. It was purchased by the Rev Thomas Evans, rector of Goytre.
The property details say it is a detached villa with dining room, drawing room, china pantry, kitchen, larder good cellar, 4 large bedrooms, coach house, 2 stall stables etc.

In 1881 Edwin Gwatkin, 34, a master carpenter employing one man is living at Ty Ifor along with his wife Louisa, 35, their children are Edwin 7, Annie 4 and Edwin 2. Living with them is William Parry 53, a carpenter.

In 1885 William Rosser of the Tavern, Pengroesoped sold a piece of land adjoining Ty Ifor to Richard Richards.

Ty Ifor was up for sale again in 1896,  it past part of the estate owned by Anne Evans, the wife of the Rev. Thomas. The advert in the free Press stated it was a Freehold residential cottage with 1 rood 13 perches, paying 7s 6d land tax. The purchaser was William Evans who paid £400 for Ty Ifor and £1000 for Pantglas.

By 1901, 40 year old Evan Jones a farmer from Brecon and his 29 year old wife Sarah from Liverpool are in residence at Ty Ifor. Evan Jones remained at Ty Ifor until 1907.

By 1911 Edwin Gwatkin was now living there again, he was now 64 and an assistant overseer of the poor for the parish of Goytre, he had been married to his wife Louisa for 40 years, had 6 children, one of which had died.

In 1914 Ty Ifor was sold to Llanover estate, the new occupier was Robert Logan who came from Mitchel Troy, his children, Kathleen, Frances, Robert and William all attending Llanover school.