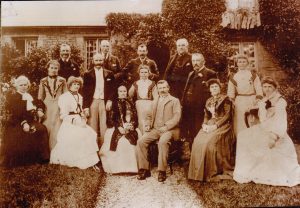 A sincere thank you to Luned James for sending me the following article . Luned’s ancestors farmed in Llanover, the wonderful photo was taken outside Church Cottage Goytre early 1900’s.

There is an 1844 marriage record for a David Hutchinson a gardener and Hannah Lewis nee Davies widow both of Brynmawr. See entry. No further research done on either David or Hannah before this date.[1]

David and Hannah were living and (probably) working at Lower Fro, Llanofer when their first daughter Mary Ann was baptised at the parish church in 1845. (lost the record)**

Hannah 43 a widow married Thomas Jenkins 54 a bachelor in 1860 and in the 1861 census they were living at Graig ddy, Goytre, with four of Hannah’s daughters and her son.

In the 1871 census the Jenkins were living in Coal Brook Villa with Isabella, Elizabeth and Margaret’s daughter Elizabeth May James is visiting.

Mary Ann Hutchinson Goytre married James Ralph a coachman of Goytre at the parish church 17th July 1880. James Ralph buried Goytre 23 De 1891. Mary Ann Ralph married William Evan Thomas 1897 in London. There is a burial at Goytre 1909 for Mary Ann Thomas of The Refreshment Rooms and a headstone which says she was the widow of W.E.Thomas and relict of Ralph. See her entry.

In 1881 Hannah and Thomas may have been living in Saron Lane where Thomas is 78 and not working, Hannah is working in a laundry with Elizabeth 27, David 26 is still living at home and granddaughter Annie Williams , Isabella’s daughter. A few months later Thomas was dead at 78, his abode was given as Fro Ganol.

1891 Hannah, Elizabeth and David are still living together possibly in the same place as previous census with George Davies a lodger (he may be a relative of Hannah nee Davies)

In December 1891 David Hutchinson married Margaret Williams, she went on to run The Refreshment Rooms at Nantyderry and he as a coal dealer from 1911 until his death in 1928.

In 1901 Hannah Jenkins age 69 (a mistake?) was living with Isabella and Thomas Evans at 2 School Cottages, Nantyderry (where the group photograph was taken)

David Hutchinson died of The Refreshment Rooms aged 73 in 1928

1911 David Hutchinson and his wife Margaret until his death 1928.