Lease for a house, shop and garden, quarter of an acre on the highway leading from Abergavenny towards Pontypool dated the 29th September 1701 to William Thomas a joyner for the lives of George, Mary and Elizabeth, the children of Thomas William. Rent 6/- and heriot 6/-

The 1821 Earl of Abergavenny survey states Dr Hobbs is the leaseholder of Brook Cottage, the tenant is Thomas Lewis. 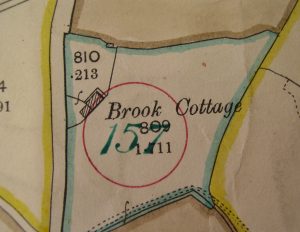 The 1822 Court Leet says Thomas Lewis died seized of a lease, the 1825 land tax says William Lewis is the occupier of the Lords land previously held by Thomas Lewis, William died and was buried at St Peter’s on the 4th September 1827, the lease is then transferred to John Lewis.

The 1840 electoral register gives John Lewis, near Twmpyn, and on the 1841 census he is aged 35, his wife Elizabeth is 30 and their children are William 11, John 7, Thomas 5 and two daughters Anne 9 and Elizabeth 1.

At a rent of £4 10s John Lewis is occupying a cottage garden and beer shop with land of 1 acre 2 rood and 37 perches.

In 1851 John Lewis is 48 and a woodcutter born Goytre, Elizabeth is 40, and 6 children. Brook on this census was called Ty Will Morgan.

The 1861 census for parts of the parish is missing and Brook Cottage is not listed.

1871 census sees a new tenant, James Cobner who is aged 55 and a carpenter living with Martha 18, Mary 8, James 7 and Thomas 4. He is married to Cathleen, who on the 18th July 1878 on the order of Col. Henry Byrde is sent to the Abergavenny Asylum suffering from melancholia.

Ownership of Brook changed by 1889 when the tithe update says Alex Edgar is the owner and Samuel Twissel is the occupier, this fits with the 1891 census as Samuel is a widower aged 59 and living at Brook with his daughter Edith 19.

A Free Press article dated 15th October 1909 says the stiles at Brook Cottage were renovated by Pontypool Rural District Council. On the 1910 valuation of the parish, Edwin Edgar of Ynyspicca is the owner and the value of Brook Cottage is £6 10s and the rateable value is £5 15s.

On the 1911 census there are 4 rooms in the cottage and Mary Edgar is aged 71, a widow, and living there with Philip Jenkins a lodger aged 82, formerly a woodman, both being born in Goytre. Mary Edgar died and was buried on the 25th April 1912 at St Peter’s Church.

The poor rate of 1914 says Edwin Edgar is the owner and Brook is occupied by Philip Williams.

In June 1915 there was an advert in the Free Press for a cottage to let on the main road, apply Edgar, Ynyspicca.

The next tenant was Charles Jones whose son Vernon died on the 10th October 1915 aged 8 hours, (see infant deaths, Usk).

David Williams is the occupier on the 1922 Electoral Register.

Two more adverts were placed in the Free Press, one in May 1927 – “for sale – rudge perfect working order, apply Brook Garage Goytre” and on the 24th February 1933 “house and garden, roadside, close to bus,” apply with references Edgar, Goytre.