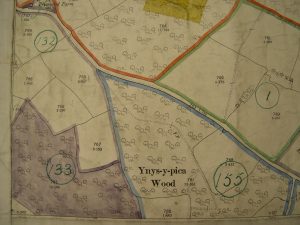 The first mention I can find is in 1780 when William Williams was the constable for Iniss y pike. His name appears again in 1797 as having land for the late Jenkin Daniel.

David Phillips of Crumlin is the owner in 1798. In 1815 Jane Phillips aged 74 of Ynys y pwcca died and was buried in St Peter’s churchyard.

A new name is mentioned in 1816, Elizabeth Jenkins, the owner still being David Phillips, Elizabeth paying 10/- land tax in 1828, but by now the owner of Ynys-y-picca is Thomas Phillips (son of David?)

The next mention I can find is on the 2nd June 1835 when John Jones aged 72 of Ynys-y-picca is buried at St Peter’s Churchyard.

In 1856 Thomas Watts purchased from the Earl of Abergavenny vast quantities of Elm and Oak trees at a cost of £19 2s for the Elm and £171 18s for the Oak.

Thomas Watts (the younger) was put on bail in March 1857 for stealing £6 2s 0d from John Roberts of Goytrey. (John Roberts was the son of James Roberts of Lower Cae Coed, Goytrey.)

The rateable value of Ynys-y-picca in 1860 was £13 10s, the same year Thomas Watts voted for Thomas Jenkins to be the new highways assessor, Thomas Jenkins winning the vote.

On the 25th July 1862 Thomas Watts the younger was fined for obstructing the highway.

On the 21st August 1866 Thomas Watts was caught stealing 5lbs of veal from John Richardson, a butcher in Usk, even though he had £65s 1d on his person. He was committed for trial at the next quarter sessions where he was found guilty but recommended to mercy as he was in drink at the time of the offence and also as he was supporting his mother. He was sentenced to one month’s imprisonment.

The following year, 1867, Thomas Watts took a court case against Thomas Jeremiah for the purchase of chains, this case was dismissed.

The 1871 census gives Mary Watts as aged 68, a widow and head of the household, Ann is 43 and unmarried, living with them is a grand-daughter Emma Mary aged 7 and a 41 year old servant William Forty.

In 1880 Ynys-y-picca had a new occupier, the Edgar family. Lewis Edmund wrote in his diary in this year that he was at Mrs Watts, looking at repairing of the house and the cottage for David Phillips.

On the 20th August 1881 Alexander Edgar was prosecuted for cruelty to a horse by working it in an unfit state, the horse had a fore-foot badly swollen and a sand crack in its foot. Fined 10/-

The next ten years seemed quite uneventful, Alexander Edgar said in the 1891 census that he was born in Llanhenoc and was 60 years old, Mary his wife was 50, Sidney was 16, Joseph 14 and with them is 19 year old Alice Cam, a servant.

Edwin Alexander was summoned for not maintaining his father in 1899. He said he owned 20 acres of land in Goytrey, he was ordered by the court to pay 1s a week. On the 25th May the same year Alexander Edgar was sent to Pontypool Union then removed to Abergavenny asylum. The reason stated “as an imbecile.”

In June 1899 Mary Edgar was fined for not having a dog license, she pleaded guilty and was fined 5s.

In 1901 on the census, Edwin Edgar was aged 30, born in Mamhilad, his wife Sarah was 28 and born in Ferndale. In 1905 Edwin Edgar purchased Plough Cottages and in 1910 was given an order by the court to repair them.

There was a court case held in Pontypool in April 1920 between John Guppy, a milk vendor from Monkswood and Edwin Edgar, over John Guppy’s horse that went missing overnight and was found in Edgar’s field. Edwin Edgar would not release the horse until John Guppy paid 8s 6d damages, the court found for Edwin Edgar the sum of 2s 6d for damage caused by the horse.

Edwin Edgar found himself in court once more in July 1920 for allowing a bull at large in a field where there was public access. Fined 20s.

In June 1925 Edwin Edgar sued Philip Williams for £8 3s 4d for damages to his property, Brook Cottage, claiming he had damaged it during his occupation, the judge said it was “a most trivial and trumpery claim.”

Again in June 1925 Edwin Edgar sued Joseph Greening of Helmaen Cottage, Llanbadoc, for £5 damages caused to a meadow by his fowls.

In August 1929 Mrs Edgar applied to the court for possession of 2 cottages called Plough, due to unpaid rent by the occupiers, Pitt and Crozier, permission was granted.

The sale of 71 acres including Cae Susanna lands, Plough Farm, Ynyspwcca land, wooden bungalow were held at the Goytre Arms on the 31st August 1955.