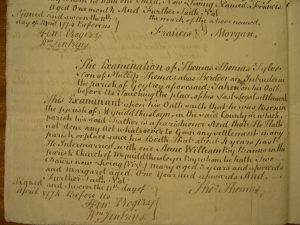 Francis Jenkins of Llanover returned to his legal settlement in Llanover

11th February 1735
William Francis and Jane his wife, children Barbara and William Henry were returned to Monkswood parish. He was serving with John Prichard of Monkswood

22nd February 1741
Jane Phillips was ordered to return to Llanfoist

7th January 1741
William Price, Alice his wife and 5 children were ordered to return to Pantague 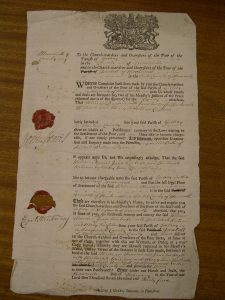 Philip Griffith and Elizabeth his wife granted settlement in Goytre

11th April 1774
Francis Valentine born Goytre about 30 years ago, gained settlement in his own right

7th April 1780
David Evan, yeoman was removed from Goytre back to Llanvair Kilgeddin

29th June 1816
Joseph Nait, a miner born in Malmesbury – no settlement in Goytre

20th August 1821
Richard Jeremiah to serve in the Militia: William Edwards have served in his place for £12

31st August 1822
Gwellian and Henry Jones living in Bwrgwm were examined as to their legal right to settle in Goytre. Made oath that their true christain names are Henry Lewis and Gwellian Jones, both above 21 years of age, both live in a house at a place called Bwrgwm and have done so for the past three months and upwards as occupiers thereof

26th April 1825
George Averill late of Goytre Lodge, a pauper, was paid by the overseers of Goytre to stay in Abergavenny

1841
Harriet Philips and her two children, James 6 and Henry 3, wife of David who has absconded. Removed from Abergavenny to the parish of Goytre

Not dated
Gwellian Williams, illegal settlement in Llanellen. With child and returned to Goytre