Another property for which there is no trace of it ever having existed. It was almost opposite Abergwellan on the opposite side of the road a little lower down towards the 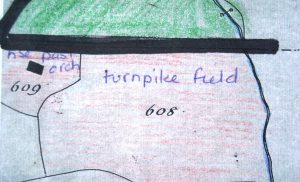 In 1841, the owner was William Hunter Little, the leaseholder of 55 acres, 1 rood and 39 perches was Francis McDonnell, an attorney from Usk.

Francis McDonnell sub let the house in 1841 to Henry Davies who was aged 55 and a woodcutter, Martha his wife was 60 and their children, John and William both 25, Mary 20, Martha 15, and a two year old called Jane.

On the 1844 electoral register Francis McDonnell’s name appears for holding the property.

William Hunter Little JP decided to widen the road in 1850, this was appealed against by Thomas Watkins, under tenant to Francis McDonnell.

Thomas Watkins remained at Gwelfan until 1857 when it was then let to Benjamin Jeremiah, a butcher from Llangibby. He said on the 1861 census that he was aged 32, a farmer and butcher, his wife Ann was 29, they have three children, all born in Llanover, Mary Ann 4, Louise 2 and Benjamin 8 months, living with them is a nurse, 15 year old Mary Lewis of Goytre.

Benjamin Jeremiah remained at Gwelfan with his wife and children for at least ten years, on the 1871 census he was aged 44, still a farmer and butcher, Ann his wife was 41, their children are, Mary Ann 14, Laura and Ann, both 12, Martha 7 and  Abraham 1.

I have no further information relating to Gwelfan from this date.