The following is an extract from the minutes of a parish meeting held on March 11th 1847.
Resolved that the Rev. Thomas Evans be elected guardian for the year ensuing and that Richard Pruett is to receive as salary henceforth for service and cleaning church the sum of seven guineas, to be paid out of the church rate.
And it was unanimously agreed to grant a rate of eightpence in the pound for the necessary repairs for the highway in the parish of Goytrey. – Thomas Evans Chairman: John Williams, Richard Pruett, Thomas Jenkins, Lan Farm, surveyor.

Goytrey Parish Council.
Goytrey Parish Council at their last meeting passed a vote of condolences and sympathy with the relatives of the late Mr C F Morgan, Maesyberan, who for the past two years was chairman of the Council.
Messrs A Jeremiah, Robert Logan, Edwin Watkins, John Evans, Harold Stinchcombe and the Vice-Chairman (Mr D H Morgan) spoke in eulogistic terms of their late Chairman supported by by Mr Thomas Jenkins, the oldest member of the Council.

In His 95th Year – Death of Goytrey’s Grand Old Man. We regret to record the death of Mr James Jenkins, after a comparatively
short illness at his home, Ty Lloyd, Goytrey on Sunday. 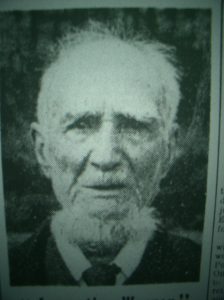 The deceased gentleman was in his 95th year and was truly regarded at the “grand old man” of the district. His great age took him back to early Victorian days of which he had a very clear and vivid memory, for his descriptions of outstanding events which took place in the locality and county long ago were always interesting to hear, particularly of the Chartist Riots of 1839 in which his father took part and of the building of the GWR main line nearby, when his cottage was converted into a cider-house.

He had spent all his long life in Goytrey where he was well known and much respected especially by the older inhabitants who remember his gigantic stature when he stood 6ft 6ins tall and weighed over 18 stone.

As a timber cutter he had worked on the Pontypool and Llanover estates and many a stubborn oak fell beneath his sturdy stroke.

It was remarkable that he had no illnesses before and he possessed all his faculties unimpaired to the last. As the youngest of several brothers, all of whom were admired for their stature and longevity he was the last of a unique family.

Until quite recently he could shoot as straight as the best marksman around and loved to follow the Monmouthshire hounds. His stories of old hunting days, when his woodsman’s tools were often thrown aside to join in the chase, were typical of late Victorian times. Even after his retirement from a life of strenuous labour in the woods, he was ceaselessly active with his orchard and garden and took a great interest in local and national affairs, though he could never read nor write.

He attributed his great age to the healthy surroundings, to plain peaceful living, abstention from modern luxuries and to fresh air exercise.

His wife, who survives him, is 93 and wonderfully smart for her age. In fact they have been an exceptional pair. The funeral was at Goytrey Churchyard on Thursday.

To Investors and Others
Attractive sale of four extremely well built, small, freehold messuages with garden ground and outbuildings, pleasantly and most conveniently situated adjacent to Nantyderry G.W.R. main line, midway between Abergavenny and Pontypool.

Known as, 1,2,3,and 4 Nantyderry Cottages, which J Staker & Son will submit to auction on Tuesday March 26th at the Greyhound Hotel, Abergavenny at 3 o’clock in the afternoon.

Bonfire, Tea, Sports and Fireworks, Captain and Mrs Whitehead’s generosity.
Goytrey Jubilee weeks celebrations commenced on Monday 6th by a display of fireworks at Goytrey Hall and the lighting of a huge beacon on the highest point of the estate. Mr Robert Logan and Mr E J Sobey were in charge and at the lighting of the beacon at 10pm loyal and delicious speeches were made by Capt., Whitehead and Mr A Jeremiah. Hearty cheers were given, a large company of parishioners and others being present.

On Wednesday, May 8th, the festivities were continued, a tea being given for the children attending Goytrey and Mamhilad Council Schools together with the mothers. This event was in the capable hands of a committee of Goytrey and Mamhilad ladies, and right well they did carry out the work.

The table decorations had been prepared by the children of Mamhilad school under the instruction of the headmistress, Miss Lilian Lewis. These looked charming, worked out in sprays of the National colours together with a lovely display of flowers sent by Captain and Mrs Whitehead which set off a double row of tables the whole length of the school, to the greatest perfection.

The Rector of Goytrey, (The Rev. T J Richards) was present at the teas and said grace.

The Sports
After tea the children were marched in relays to a field kindly put at the service of the Committee by Mr Stanley Morgan, Goytrey House Farm, where the genial Rector of Goytrey, with others, kept things going until the sports committee with Mr A Jeremiah (chairman) Mr W I Morgan (Lindhurst, treasurer) Mr Harry Owen, Mr Harvey, Mr John Williams (Clerk to the council) and others had arranged a splendid programme.

At the end a race was put on for married ladies and an unsuspected fleetness of foot was displayed by some competitors. Great enthusiasm was shown in this race as also in the tug – o’ – war which was won by the Mamhilad section.

A hearty vote of thanks to Captain. and Mrs Whitehead was moved by the chairman of Goetre Vawr Council who said that it was through their generosity that the function had been made possible. Mrs Whitehead defrayed all the expenses of the tea whilst Capt. Whitehead had given a substantial sum for the sports etc.

May 24th – Goytrey Motorist Fined For Carless Driving at Newport

Thomas Evan Jones, a Goytrey school-master, was fined £2 and ordered to pay 10s costs at Newport Police Court for having driven carelessly on the main road at Malpas and failing to stop afterwards.

PC Waddington said that he was standing near the police box, not far from the borough boundary, at Malpas, when he saw a cyclist riding towards Llantarnam. Jones was driving the car in the same direction, and seemed to drive right into the cyclist.

The running board of the car struck the offside pedal of the bicycle, he signalled to Jones to stop, but he did not pull up for 111 yards. “He did not seem to have proper control of the car,” said the officer.

The cyclist, Charles James Bright, a Lysaght’s workman said that he managed to put out his foot as he was falling and so saved himself. The car was driven “fairly fast.”

Jones said he was driving very carefully, and had passed several streams of traffic. He saw Bright wobbling about forty yards in from of him, and sounded the horn. There was plenty of room to pass and the course of the impact was the cyclists wobbling.

He did not see the policeman signal, but pulled up on his own accord. He was unaware at that time that he had struck the cyclist for the impact was slight.

A passenger in the car, Albert Higgs, of Goytrey, described Bright as zig-zagging across the road.

At Pontypool Petty Sessions on Saturday, Arthur William Joseph Jones, licensee of the Goytrey Arms, was summoned for supplying beer during prohibited hours, through his agent, Milicent Reardon, to Percy Philip, Gordon Whittingham (47) a Nantyderry farmer.
Reardon and Whittingham were summoned respectively for supplying and aiding and abetting. They pleaded not guilty.
Mr WHV Bythway, solicitor, Pontypool was for the defendant.

PC Ackland said that at 5.25 pm on Friday, August 16th, he saw Whittingham come out of the front door of the Goytrey Arms with something bulky under his coat. Asked what he had there, he said, “A bottle of hop bitters.” Witness examined it and found it was a bottle of ale. He interviewed the landlord, who said, “I was in the kitchen having my tea.” Reardon said “I supplied it, but it was paid for before three o’clock.” Whittingham said “I was asked to call for it.”

Half an hour too soon.
Mr Bythway: It appears that Whittingham employed a man called Bayliss to cut grass and Bayliss had asked him to call for a bottle of beer. Whittingham could have purchased the beer in Pontypool before three o’clock but as it had been paid for at the Goytrey Arms before three o’clock he called there for it on his way home in his car. There is no question of consumption. It was simply taken away half an hour to soon.

Jones has kept the house ten years without a complaint and I suggest that the magistrates will not consider that there has been a serious offence. Payment of costs was ordered in each case, Jones £1 and Reardon and Whittingham 10s.

George Evans, 49, of Bryngwyn Farm, Goytrey, between Abergavenny and Pontypool, collapsed and died on Tuesday while waiting for the bus at Lapstone lane, Goytrey.

An accident on a Goytrey farm was the subject of a case at Pontypool County Court on Wednesday in which Richard David Joseph Williams, poultry farmer, of Coldbrook, Goytrey, was the plaintiff and Evan Davies, of Penywern Farm, Goytrey, the defendant.

Mr Howard Everett, Pontypool for the plaintiff, said the accident happened in December, 1934, when the workman was attending a chaff-cutting machine driven by a horse. His right leg became entangled in one of the shafts, and both bones of the leg were broken. There was a slight shortening of the leg and there was a question as to whether that was due to a certain paralysis from which he suffered before. His wages were low – 15s a week – so that compensation would amount to 11s 3d a week. he still suffered certain amount of incapacity.

The defendant had offered to pay £40. If his honour thought that an inadequate sum, Mr Everett suggested that an adjournment might be ordered to enable the parties to get together. His Honour said he thought £40 was inadequate, and that a sum of £100 would be more suitable. He ordered an adjournment of the case, as suggested by Mr Everett.