Although there is a document which could possibly refer to Vine Tree, I cannot verify it so will start with 1835 when John Waters of Vine Tree Cottage appeared on the assessor list for the parish. 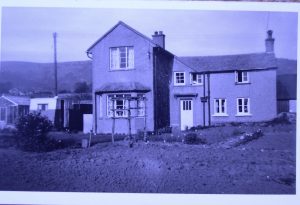 The Usk observer in 1839 mentions John Waters as having ownership of a property called Vine Tree.

The tithe of 1841 says John Waters is a besom (broom) maker and has a cottage and garden of 1 rood 16 perches in hand and is paying 1s 9d tithes to the rector. The census of the same year says John is a 40 year old labourer, Cecilia his wife is 30, their children are Caroline 10, Jonah 8, Enoch 6, Elias 4, and two year old Ruth. Caroline later married a William Brinkworth, they had 10 children, she died in 1913 aged 85 in Newport.

In 1848 Cecelia died aged 37, she was buried at Saron Chapel churchyard.

On the census of 1851 it says John Waters was born in Usk, living at home with him are two of his children, Elias who is now 14 and twelve year old Ruth. Ruth later married Alfred Brooks, they had three daughters, she died in 1925 at Trevethin, she was 85 years old.

By 1861 John Waters is 61 and a green joiner. In 1864 John took William Phillips his neighbour who lived at Castle Cottage to court in Usk for an outstanding debt of £1 7s 8d.

In February 1869 John Waters found himself in court for encroaching on the highway, in his statement he said he had owned the property for more than 30 years, he had left a quantity of mould 15 feet from the centre of the road and said it was his own land, he also said that the late Mr Owen (John Gwynn Herbert, solicitor, Oak Cottage) had tried to get him from there and had issued a writ against him.
The case was now in the Queens Bench and therefore this Bench had no jurisdiction, the case was dismissed.

The census of 1871 says he is now 71 and married to Fanny, living with them is his son Enoch who is 36 and a woodman. Around this time Enoch built High House in the grounds of Vine Tree.

John found himself in trouble again in July 1873 for the same offence, encroaching the highway and ground with besom stuff and was ordered to pay 13 shillings.

Sadly John Waters died a month later in August 1873 aged 74 and was buried with his wife at Saron Chapel churchyard. His will, proved the 3rd November left effects under the value of £100 to his son Enoch.

Mathias Phillips who lived the other side of the lane at The Castle Cottage then purchased Vine Tree Cottage.

The census of 1881 says Mathias is 40 years old and a labourer, Eliza his wife is 52, she has a son William Easton and they have a boarder, 8 year old William Francis.

The updated tithe map of 1888 gives Mathias Phillips as the owner of Vine Tree Cottage.

By 1891 he is employed by GWR as a platelayer. The 1901 census says Mathias is 60 and still employed by the railway and Eliza is 72. Mathias was born in Goytre and Eliza in Mamhilad.

On the census information of 1911 Vine Tree Cottage had 4 rooms, Mathias and Eliza had been married for 46 years, had 4 children, none of which had survived.

Eliza died in February 1917 aged 88, Mathias in December 1920, they were both laid to rest at Saron Chapel.

In residence in 1920 was Mr H Gardiner, this was followed in 1922 by my great uncle Edwin Morris with his new wife Harriet. At some point he purchased Vine Tree from Richard Bowen but I don’t know when.

Edwin was born at Penwern Cottage in July 1889 and remained in Goytre nearly all his life.

In 1947 Harriet committed suicide by throwing herself off the canal bridge at Park-y-brain.

In 1948 Edwin’s brother, 52 years old Ernest Charles Morris, a painter and decorator was living with him. In a Free Press article of December  that year  Ernest was fined 40 shillings for dangerous driving. Two years later Edwin re-married Nellie Fear, she also died a few years later.

My Morris family went to live at Vine Tree in the late 1950’s, we later moved to Arrow Cottage.