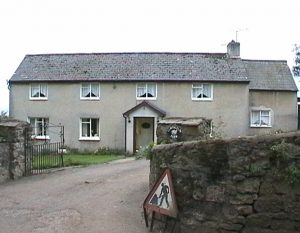 The parish register at St Peter’s Goytre says John Jenkins, a labourer was living at Llwyn Celin, he had a son Roderick baptised in 1733 and another son Edward baptised in 1738.

In 1756 William Jenkins was the overseer of the poor for Llwyn Celin, in the same year Morgan Jenkins, husbandsman wrote the following:

S’r, You are hereby desired to publish banns of matrimony between us, Morgan Jenkins husbandsman that now live at Lwyncelin and Anne Griffiths spinster that live with her father Walter Griffith at Penpellenig both within the parish of Goytrey.

In the presence of Walter Griffith; Rachel Williams both by x

In 1782 Roderick Jenkins married Catherine Morgan of Goytre House Farm, a daughter Mary was baptised in October 1782 followed by William in November 1784.

Roderick Jenkins died at Llwyn Celin and was buried at St Peter’s on 31st January 1787.

1831 the owner/occupier was Thomas Jenkins, he was the constable for Llwyn Celin.

Between the years of 1833 to 1837 a pauper, Mary Jones occupied a part of Llwyn Celin, she was allowed by the overseers of the poor a rate of 1/- per week plus coals. I cannot find a burial for her.

Walter David in 1837 was both overseer of the poor and land tax collector for Llwyn Celin. Confirmed as the owner on the 1841 tithe was Rebecca Harry and the occupier Walter David, who, on the 1841 census was aged 50 and a farmer. Mary his wife was 45, and their two children, Thomas 13 and Ann 16 were living with them.

Walter David continued living at Llwyn Celin, being the overseer of the poor in 1850 and also stated his religion was a Baptist.

The owner of Llwyn Celin was now James Harry of Newport (I assume the son of Rebecca) he was entitled to vote as the owner of freehold land in the parish of Goytre called “Llewyn Celyn”. In an undated document The rateable value of Llwyn Celin was £2 10s this increased to £12, again it was not dated. 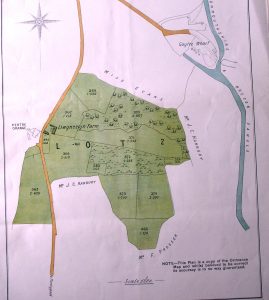 By 1866 Llwyn Celin had a new tenant, Thomas Lewis, who along with Benjamin Jeremiah was appointed overseer of the poor. On the 1870 electoral register Thomas Lewis was named as the occupier of a house and land known as tenant, his age on the 1871 census was 61, he was a widower and had a servant called Hannah Matby aged 55.

In 1875 Thomas Lewis’s son John married Margaret Thomas of Pentre Cottage who was the daughter of John Thomas, a copper man.

I am unable to say with certainty who was living at Llwyn Celin on the 1881 census but by 1891 it was Charles Jones, 37, a wheelwright who was born in Dixon, and Mary 31, his wife who was born in Monkswood.

By 1901 Thomas Jones 31, a farmer, his wife Sarah, 30 and their two children, Edith 8 and Albert 5, were residing at Llwyn Celin. All were born in Goytre.

In June 1908 Llwyn Celin was advertised for sale in the Free Press, offering a farm of 22a 2r 16p, a house, land and buildings in the occupation of Thomas Jones, yearly tenant at a rent of £16 per annum (and undertenant of the late Col. Henry Byrde) tithe paid last year was £1 14s 4d

The same year Thomas Jones sold his Live and Dead stock in a sale.

A tragic accident occurred in 1910 when Mr Frank Jones, 38, of Llwyn-Celyn farm Goytre, a married man with three children was found dead at the bottom of a quarry. He was shooting on the land of Mr Roberts, Penystair Farm when it appears that he slipped and the gun went off accidentally. He was buried at Monkswood Church.

On the electoral register for the years 1912-1919 Richard Dobbs was the occupier. For the years 1921-1922 it was Harriet and Alfred Godfrey.