Goytre is a village between Pontypool and Abergavenny, once in the Manor of Pelleny and the Hundreds of Abergavenny. 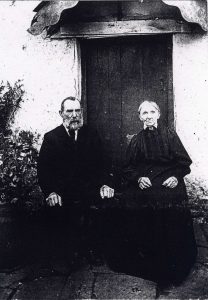 For many years I have been researching the parish history, it  began initially with a lovely lady called Sue who I met at the records office whilst we were both researching the Rosser family history.

Where records exist I have attempted to write a little about each house, some are now in the parish of Llanover,  a few have had their names changed and some are no longer standing.

With the kind permission of the National Library of Wales wills and leases are also available.

The old Newspapers, particularly the Free Press have been a wonderful source of information, everything that happened in the parish was reported, good or bad.

So I would like to share with you the people and events that made the community. The photographs on the site are a vital record of the history and inhabitants and I should like to ask if you have any stories or photographs of or about the parish or it’s people please do get in touch.

Finally I should like to thank Sue for her work in the early days of this project, Dave Woolven for the hundreds of wills and leases he transcribed, Lord Abergavenny for permission to use certain material and the staff at Gwent Archives (particularly Frances Youens for keeping me informed when any new information about the parish have been deposited).

The following is a description of the parish taken from William Coxe’s ‘An Historical Tour of Monmouthshire’ published in 1801.

“The hamlet of Goytre or Coedtrev in the midst of the region derives its appellation from the forests with which it is surrounded and abounds with delightful recesses and pleasant glades dotted with white cottages.

Mr Waddington remarked that this district continually reminded him of the wilds of America and in the course of our rides pointed out to me a house recently built by a gentleman who passed a great part of his life on the other side of the Atlantic and chose this position from its striking resemblance to the scenes which were familiar to him from his infancy.

The hamlet is a collection of scattered cottages placed at inconsiderable distances from each other.

A farm house adjoining the church bears the appearance of a decayed mansion and is almost the only object in the vicinity.

The situation of the church itself stands on a site and embossed in the woods is no less picturesque than that of Llanover, though of a different cast, the simplicity of the form without a tower and in the early style of gothic architecture accords with the surrounding scenery.

The few by-roads when interfaced this tract are straight, deep, narrow and stony and exhibit occasional traces of paved causeway which prove that it was farmed more frequently that at present.”