The first mention of Ivanhoe is on the 1933 electoral register when Ivor and Doris Hopkins are in residence.

Ivor was born in Monmouth in 1897. On the 1911 census he is living at Cinderhill Street Monmouth with his parents William and Matilda and nineteen year old brother Joseph. William and Joseph were both farm labourers.

The 1939 register gives Ivor as a roadman, and Doris as an unpaid domestic servant. Living with them at Ivanhoe are Leslie John who is at school, Catherine Arnold who is 8 years old, and William Badham, a contractors general labourer. (I assume William is a relation of Doris.)

In October 1945, 24 year old Airman Cyril John Hopkins wins the DFC for his numerous operations against the enemy 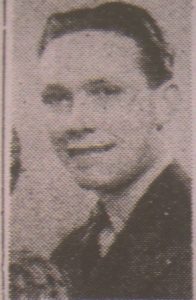 in which he displayed the utmost fortitude, courage and devotion to duty. Cyril was educated at Abersychan Secondary School and before going to war was employed by Dean tailors in George Street, Pontypool. He now lives in Llandefeilog, Carmarthen with his wife and three children.

Ivor and Doris remained at Ivanhoe, the last details I have are in 1947.