This cottage is no longer standing, it was in the centre of Pengroesoped, at the top of Lapstone lane on the right. 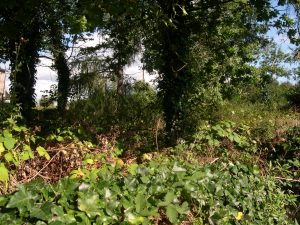 Before 1766 the cottage was owned by Francis Morgan of Llanover,   he gave it to his daughter Margaret on her marriage at St Peter’s on the 18th July 1766 to William Mathews. There is an examination of William Mathews in 1774 to his right to reside in the parish as he was born in Llanthewy Vach, he said he had gained the right as a servant to Francis Morgan of Llanover, his father -in-law.

In 1793 Margaret, the daughter of Margaret and William Mathews  married William Jeremiah. That same year her mother Margaret Mathews, widow, died and was buried at St Peter’s.The 1841 census and tithe says William Jeremiah is the owner of freehold land and cottage, he is aged 70 and a wood collier, living with him is Maria 35 and Margaret 2.

On the 20th June 1849 William Jeremiah sells Thatch Cottage for £30 to William William, the coal merchant of Goytre Wharf.

I am not certain who was living at Thatch on the 1851 census as most of the house names have been left blank but about this time the new owner William William built a pair of cottages in the garden of Thatch Cottage, they are called Pengroesoped Cottages, the cottages are still here today.

In 1860 William Williams of the wharf moved to Hereford and sells Thatch Cottage to Sarah Price of the Wain-y-clare for £220.

On the 1861 census the occupier is David Morris 25,  a woollen spinner, David was born in Cardigan,  his wife Mary is 21, along with his son also called David.

This ties in with the fact that Samuel Harris, the woollen manufacturer of Gwenffrwd was renting the garden cottage from Sarah Drinkwater (nee Price).

In 1871 another spinner, John Jones aged 63, his wife Elizabeth 60 and a lodger, Morgan Jones 31 and also a weaver were living at Thatch Cottage, but he 1872 land tax says Ann Jarret is renting the property.

Sarah Drinkwater died in 1881, her son William Price made a declaration as to his right of title to the property.

The following occupying families were Francis Herbert a labourer in 1887, Morgan Davies from 1888 to 1896, then William Evans, woollen spinner, with his wife Elizabeth. The next information I have is that by 1914 Llanover Estate are liable for the poor rate and the occupier is Jane Higgs.