Owner: the Earl of Abergavenny.

The will of John Hughes in 1807 leaves his leasehold property in Goytre comprising of a messuage, tenement, barn, six closes or parcels of land situate in the parish of Goytre called Park Bach, also that parcel of land called Caer Bushes, (now in the occupation of Thomas Jenkins,) to his wife Mary Hughes.

The 1841 census says William Lewis aged 60, William Morgan 35, Elizabeth Morgan 35 and Eliza Morgan 5 are living at Parc Bach and the owner on the tithe is the Earl of Abergavenny.

By the 1851 census Luke Griffiths aged 40, a farmer born in Langview, and his 80 year old mother born in Llandenny are living at Parc Bach.

On the 1861 census, Charles Watkins aged 43 and his wife Elizabeth 47, and children Elizabeth and Margaret twins aged 9, Charles 5, John 3, and Thomas 2 are now at Parc Bach and they continue to live there until after the 1881 census.

In 1901 Louis Morgan aged 35, farmer, Hannah his wife 34 and born in Bristol, and children Benjamin 9, Millicent, Gladys and Clifford, all born Goytre were living at Parc Bach.

By 1906 William Jones had become the tenant and placed an advert in the Free Press: 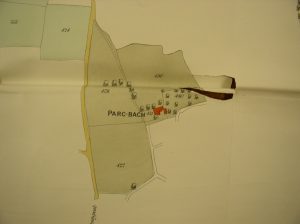 In 1920 the Earl of Abergavenny finally sold Parc Bach, it was purchased by Henry Morgan for £90, the estimate being £45. A piece of pasture land known as Parc Bach containing 3a 18p in occupation of H Gwatkin was purchased by Rufus Evans for £115.

On the electoral register for Park Bach in 1923 are Herbert Gwatkin, Annie and Elsie.