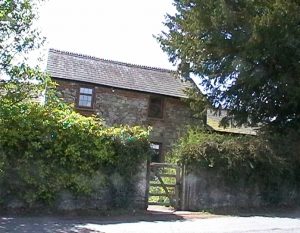 This one of of the few properties privately owned in the parish. The first mention I can find is William Price as owner of Penyrheol on the 1837 electoral register, he was a freeholder and the position of Penyrheol was given as “land near Goytrey House.”

On the census of the same year William Price is aged 35, living with him is a 15 year old servant, Diana Thomas. William held the position of constable for the years 1842-44.

The 1851 census gives a little more information, William Price is now 48 and a labourer, he was born in Brecon and is now married to Mary who is 36 and born in Trevethin, they have a son Thomas aged 8 who was born in Goytrey.

William Price once again held the position of constable for the years 1855-7. In 1859 William Price signed the local petition against paying taxes for the widening of Newport Bridge, he gave his occupation on the petition as shopkeeper.

On the 1871 census William is aged 60, an agricultural labourer, Mary his wife is 46, living with them are their children, John 12, William 6.

Very little changed over the following years, on the 1881 census, son, William Price was 16 and a railway porter, and on the 1891 census William senior was 89 and still an agricultural labourer.

William Price senior died in 1894 aged 88 and was buried at Saron Chapel, Mary his wife died the following year aged 72. Also mentioned on their headstone is son John who died in Hannibal USA aged 36 the same year.

The new occupier by 1900 was Edward Lloyd, a farm bailiff born in Christchurch. By 1910 William Summers was living at Penyrheol,family.

The census of 1911 says Edward is 54, a county council roadman, born in Caerleon, Susan his wife was aged 53, born in Lansoy, they had been married for 33 years and had 5 children, one of which had died,  living with them is their son Edward, 32 a masons labourer,  born in Pontypool and a boarder William Morgan aged 25, a gardener from Abergavenny.

In 1918 Jane Roberts of Penyrhoel, Goytre died aged 92 she was buried at Llanellen.

The last family I know of living at Penyrhoel is the Williams’, with a son called Lal, and taken from the Free Press dated July 1st 1927 is the following article:

“Laly Williams fell out of the charabanc at Barry Dock on the annual Sunday school outing, had a split lip and required 3 stitches.”

Lal Williams died in July 1969 and is buried at Saron Chapel, I remember him as a very kind gentleman.