Now in the parish of Llanover. 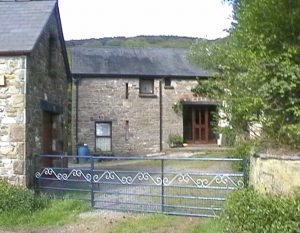 Ann Harry, in an undated Earl of Abergavenny lease before 1782, was renting a cottage and quarter of a cover. An indenture in 1872 said she was aged 74, and her new lease was for the lives of Ann 23 and Martha 10, the children of Thomas Millwright.

On the 1881 census the children’s father is named as Walter Jenkins aged 42, a gamekeeper, he was born in Goytre, his wife Ann is 44. In addition to the three children mentioned above are Maria 10, Rachel 6, Martha 4, and one year old Mary.

By 1891 Walter Jenkins and his family have moved, the new occupier is Isaac Hatwell aged 66, he too was born in Goytre and is an agricultural labourer, he was still living at Ty Bach y Bwrgwm on the 1901 census, where it states he is now a widower.

The electoral register in 1905 says the owner is the Rev David Davies, Hanover.