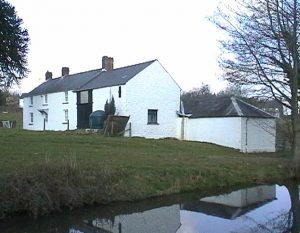 The 1798 land tax says John Hughes is the owner and William Phillips is the occupier and the parish records until 1801 also say the same.

William Phillips dies in 1808; he was buried at St Peter’s Church. After his death the new occupier is Thomas Jenkins.

The owner, John Hughes of The Reddings, Llangwm Isaf dies in 1807 leaving “all that messuage, tenement called Kiln House, barn, twelve closes of land, arable, and meadow to Mary his wife. (John Hughes also owned Parc Bach.) Mary Hughes is listed as the owner on the land tax until 1823.

Edward Edwards of Caerleon takes the lease of Kiln on August 2nd 1818 with William Lloyd still being the occupier.

In 1823 another child called Martha the daughter of William and Mary Lloyd, a farmer at Kiln farm, is baptised at St Peter’s Church.

William Lloyd and his family move to Church Farm in 1829.

The 1831 land tax for Kiln says William Morgan is occupying late Mary Hughes house, barn and land and the present owner is Rachel and Mary Mathews.

Lewis Edmunds (the local builder) writes in his diary on the 10th May 1855 that he is at Cill plastering inside and repairing outside for William Cocker. 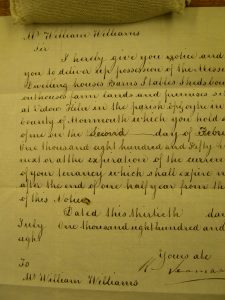 At the spring assizes in 1859 is a court case Seamark v Williams, declarations are given by Richard Pruett and William Plaisted.

William Cocker is still the occupier in 1860 and is also overseer of the poor and he also voted for William Harris to be the highway overseer. On 1861 census William Cocker is 49, a farmer, his wife Mary is also 49.

There is a court case in the Usk Observer on the 22nd October 1864 where William Cocker claims 5/3d from Herbert Edwards a shoemaker of Goytre for goods obtained – Herbert Edwards was ordered to pay within a week.

An advert in the Free Press of 21st October 1876 says there is a stock and furniture sale, the property of Mr John Turner who is leaving Kiln Farm, some time before this date John Turner signs a petition to object to the removal of the quarter sessions from Usk to Newport.
The sale consists of implements, hay, straw, 9 tons of fodder, 5 tons of hay, wagons and carts, various agricultural implements, a mare in foal, ewes and poultry. Also household furniture including an oak table, chest of drawers, feather beds, 8 day clock, writing desk any many other items.

By 1879 John Davies is the new occupier and on the 1881 census he is aged 51, a farmer, Mary his wife is 50, both were born in Brecon, their children are William 25; John 17; Thomas 10 and Margaret 5, all born in Blaina. In 1882 Thomas received a school certificate for freehand drawing, science and art.

John Davies was summoned in 1883 by the board of  guardians for the non-attendance of school by his daughter Margaret Jane.

Thomas Roberts decided to sell to Lady Llanover in 1887 and William Rosser was given notice to quit.

The new tenant under Lady Llanover was Daniel Davies from Carmarthen. He stayed until 1902 and at that time placed an advert in the Free Press for the sale of live and dead stock as he as leaving Kiln Farm.

David Jones becomes the new tenant and on the 1911 census he is aged 70, a farmer from Cardigan, Margetta his wife is 55, they have been married for 12 years and have 2 children, Margaret and John who attended Llanover school.