I have named this property Progers after the family who lived there, as I have been 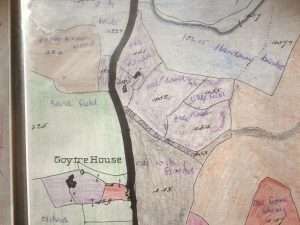 unable to find a name for it.

The 1841 Tithe Map number is 450, the property is no longer standing but my aunt remembered it whilst she was a young girl as she passed it daily on her way to school.

A new property, Ellersley, was built close to the site of the original house, it is Mr Logan’s on Park-y-brain lane.

In August 1730 a child called Elizabeth is baptised at Goytre Church, she is the “reputed” child of Thomas Proger and Jane William Jenkin of Lanvair Kilgeddin.

The first record starts with Thomas Proger in 1734 with the birth of a child called William, another child Ann is born in 1736, Ann died in 1739.

The next mention is in 1798 when Judith Proger paid the Land Tax for her lease.

In 1804 Richard Proger married Rachel Williams at St Peter’s, their first child Mary was baptised in September 1806. The same year his mother Judith Proger died and was buried at St Peter’s Church.

On the 29th September 1807 Richard Proger is granted a new lease from the Earl of Abergavenny for the lives of Richard aged about 30, Rachel his wife aged about 32 and Mary his daughter aged about 1. The property information says; a messuage and 3 acres of freehold land of Capel Leigh on the north, lease of William Jenkin on the east and the highway from Penpellenny to Penstair on south and west.

In 1820 Richard Proger was the constable for his lease and it is about this time his name first appears in the parish overseers accounts, he is now mentioned as a carpenter.

The parish valuation of 1831 says the cottage and land is worth £6 and the old house and land is also worth £6.

The Electoral register of 1832 says the cottage is near Park-y-Brain.

The 1841 census and tithe confirm the owner is the Earl of Abergavenny, the census gave Richard and Rachel Progers ages as both 65, living with them is their son William 20, a carpenter and their grandson William Newman aged 8. Also, they have an apprentice carpenter, 15 year old James Lewis and a female servant, Ann Prosser aged 25.

Rachel Proger died in February 1849 her age was given as 73, by 1851 Richard has moved to Blaenavon where he died in 1865 aged 89 but was brought back to St Peter’s to be buried with Rachel.