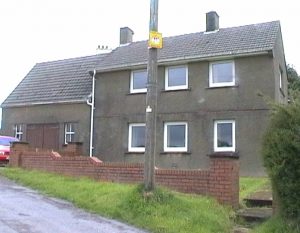 The first mention I can find is in 1770 when William Morgan is constable for his lease of Trewaelod, he is mentioned again in 1802.

In 1837 William Evans, the occupier of Trewlaelod  was the collector of land tax for the owner, Miss Ann Jones.

The 1841 census says William Evans and his wife Elizabeth are both aged 55, the tithe once again says the owner is Miss Ann Jones.

By the 1851 census Henry Mathews, 28 from Llanbraddock is living at Trewaelod, he is a farmer of 23 acres, Sarah his wife is 23 and was born in Panteg, their children are Eleanor 2 and William 6 months, both being born in Goytre. Living with them is Sarah’s mother, Elizabeth Weeks a widow aged 77 who was also born in Llanbraddock.

The overseer of the poor records show in that 1853 Henry Mathews was collecting the land tax for Trewaelod.

Henry and Sarah Mathews had two daughters baptised at St Peter’s, Mary Ann in December 1854 and Emily in April 1857.

The overseer of the poor record at this time says William Harris is collecting the land tax for Trewaelod, Henry Mathews is still in occupation.

The 1861 census for part of the village is missing, this includes Trewaelod.

By 1871 Henry Mathews has moved to Great House Farm, Mamhilad. His daughter Hellin 21, along with her sisters Mary and Matilda both aged 8 are living at Trewaelod.

The same year Elizabeth Mathews married William Harris from Monkswood, William was 21 and a blacksmith. 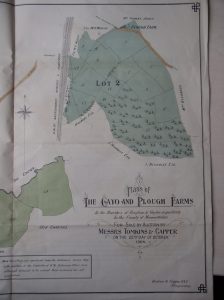 Trewaelod had been renamed Plough by 1881, the owner is Henry Mathews and the occupier is William Evans aged 31, a wheelwright born in Pontypool. His wife Rebecca is 31 and was born in Machen, they have a one year old son Edward who was born in Goytre. Living with them is Rebecca’s mother also called Rebecca, she is 65, a farmer’s widow, and Rebecca’s brother James Williams who is 25 and a farm labourer.

The Evans family had moved to Coalbrook Cottage by 1883 and Henry Mathews’ daughter Elizabeth and William Harris took occupation with their children Mabel, Edward, Reginald and later Charles who was born in 1885.

Henry Mathews returned to live in Plough by 1901.

Plough was sold in October 1904, the owners were given as Emma Catherine Williams, a widow, and Thomas Reece Williams. The property description says “There is an old fashioned stone built dwelling house containing 6 rooms, adjoining is a stable for 2 horses and pig styes. Conveniently situated in one of the fields is a useful barn with stables and a fowl house.” The property had 35 acres 0 rood and 17 perches. 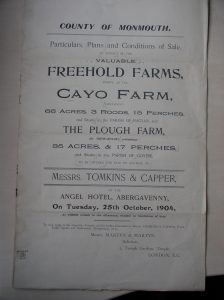 Brochure for the Sale of The Plough Farm

The 1914 poor rate says the owner is Frederick J Lowe.

1931, at No 2 Plough Cottages the death of Florence Kate Long aged 53 was reported.

In June 1932 Edwin Edgar (of Ysyspwcca) the owner of Plough was given an order by Pontypool Rural District Council to make repairs to the cottages, he did not do so and was once again taken to court for not complying. The roof and windows required attention and the walls required cementing due to dampness, Mrs Edgar blamed the tenants for not having lit fires during the winter.

Joseph Edgar of Plough Farm Cottage failed to make his agricultural returns and was fined £10.