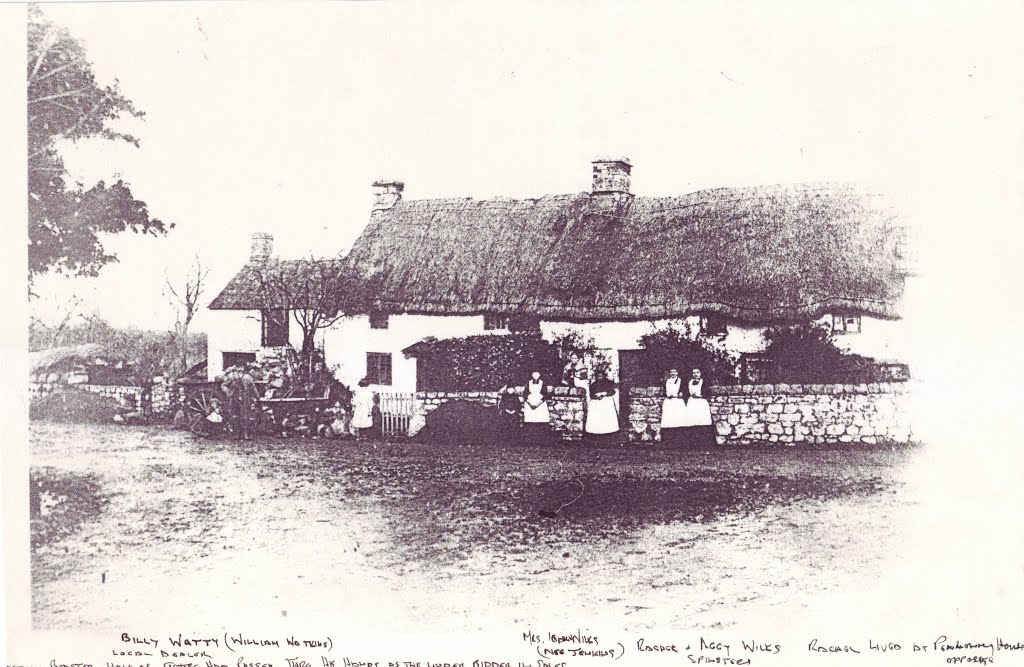 The owner of Phoenix Cottage and blacksmith’s shop was the Earl of Abergavenny. This is a very old cottage, possibly dating to the 14th century.

Phoenix Cottage is in the centre of the village of Pellenny, an ideal position for the blacksmith’s shop where all the main highways passed.

George Jenkin holds one messuage, 1 barn, one smithy/forge in Pellenny, lately Lewis Watkins and before that Mathew Thomas Llus (Llewellin?) and pays per year 1d.

In the year 1692 Roger Richard holds a cottage adjoining 4 acres of waste on Pellenny Common that his mother, Alice Roberts lives in. (This is passed to William James of Llanfrechfa in 1725.)

By 1705 the lease, held by John Mathews, smith, of Llanover, of a cottage and smith’s forge..

Earl of Abergavenny lease 1018, dated in 1736 is now held by Walter Griffiths, he is holding a house, and smiths shop, the same year a second lease number 1053 is again granted to Walter Griffiths, smith, of a cottage and smith’s shop.

By 1762 William James is now holding the lease for Phoenix Cottage, he is mentioned in the overseer of the poor records as a smith and again in 1767 when the records says that he has the lease, which is late Mr Griffiths.

William James remains at Phoenix Cottage and there is a mention of him in 1781 when the lease he holds states he is a blacksmith and holds a cottage, garden and 3 parcels of rough land and holds the lease handed to him by Richards in 1725.

William James died in 1805, and was buried at St Peter’s Church, Goytrey.

On lease number 125 in 1807 Joseph Griffiths, blacksmith, takes the lease from the Earl of Abergavenny, but only for part of a messuage or dwelling house, William Williams is holding a lease “for the other part of the dwelling house.” 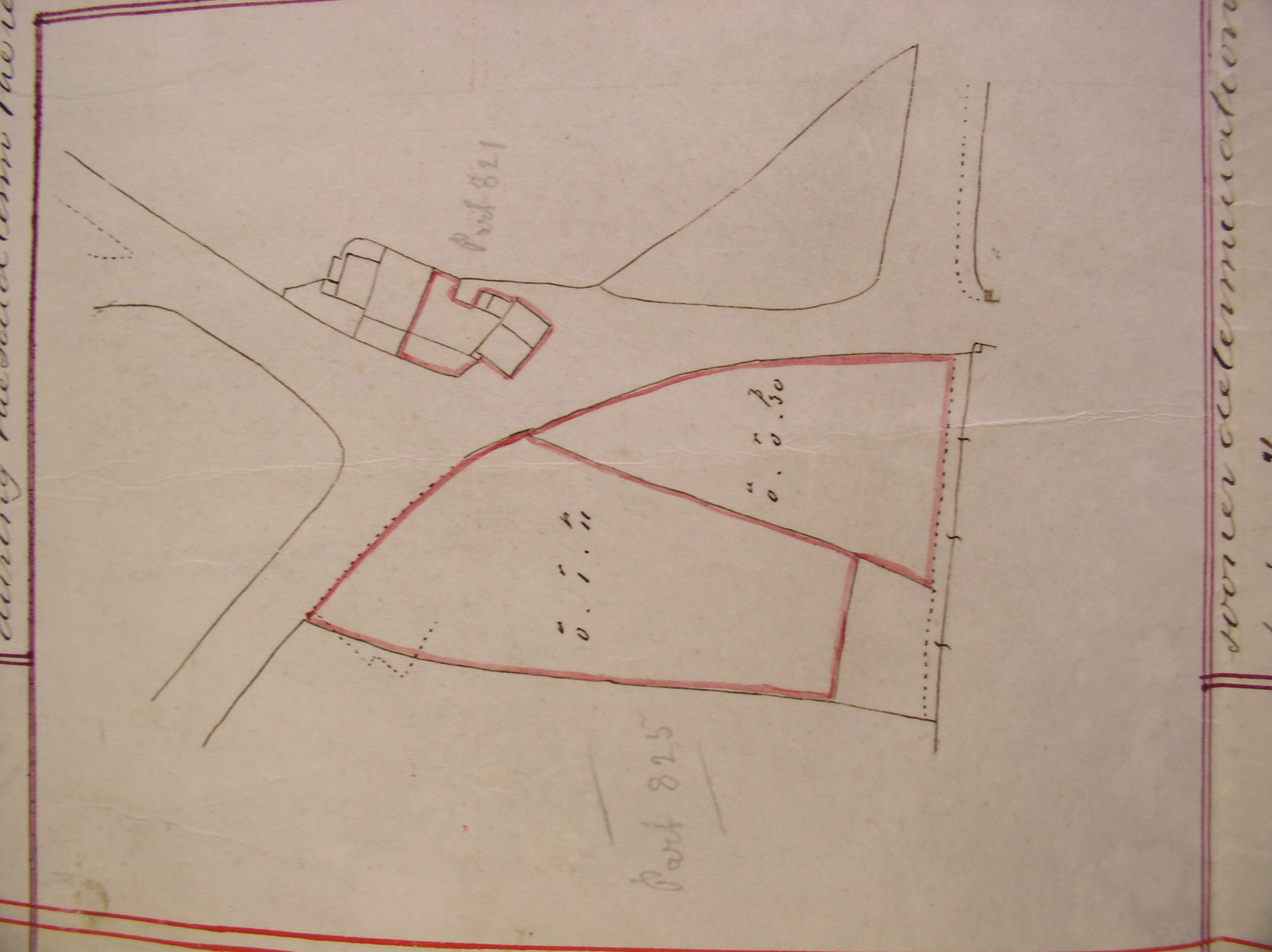 Joseph Griffiths, during the years 1826-1831 is sitting on the Court Leet jury.

In 1831 valuation of the parish was taken, Joseph Griffiths was in occupation of house, garden and smiths shop, which was valued at £6.0.0.

By the census of 1841 David Jenkins and his wife Elizabeth are living at Phoenix.

This changed in 1845 when Isaac Wilks and his family moved from Goytrey House Farm to Phoenix Cottage where he lived for the remainder of his life as the blacksmith in the village. Isaac had married Elizabeth Jenkins in1841.

His first purchase for coal was the 8th January 1845 when he paid £1 0s 0d, he continued his purchase of coal for the smithy from William Williams, Goytrey Wharf.

The census of 1861 for the lower part of the parish is missing.

In May 1870 Isaac Wilks was accused of assaulting Mary Mathews in Mamhilad, I don’t know if this is the elder or the younger Isaac.

Elizabeth Wilks, daughter of Isaac and Elizabeth married William Farr of Aberbeeg at St Iltyd’s, Mamhilad, on 4th October 1875, the witnesses were William and Martha Wilks.

There is an entry in the school register in 1880 saying that Isaac Wilks is the guardian of Polly, born 1875 and John Jackson born 1876, the children of his daughter Maria who had married John Jackson in 1873.

On the 1881 census Phoenix is called Penperllenny Cottage number 1. Isaac is now 62, still a blacksmith and was born in Goitrey, Elizabeth is 58 and was born in Mamhilad., daughter Rachel is 17, a dressmaker, also living with them is their grand-daughter Mary Ann Jenkins who was born in Llantrissant.

The census of 1891 says the property has 4 rooms which are occupied by Isaac who is now 73 and Elizabeth 68, and daughter Rachel who is now 27.

The new blacksmith (but not in occupation of the cottage) was Frederick Hodgekiss, who ended up in court in November 1894 for obtaining, by false pretences 2s from William Wilks. To this charge Frederick pleaded guilty.

The census of 1901 at Penperllenny No. 3 is Elizabeth Wilks, a 78 year old widow and her daughter Rachel, a 37 year old dressmaker.

Elizabeth Wilks died and was buried at St Peter’s with Isaac on July 1st 1905.

On the 1911 census Rachel is on her own at Phoenix Cottage.

In 1920 the Earl of Abergavenny sold his properties in Goytre. The description given for Phoenix Cottage is a smith’s shop and cottage and part garden, held by Miss Wilks, sold to the tenant.

In 1935, Rachel Wilks was mentioned in the inquest of her cousin, Mary Williams of Bedfont Cottages.

Rachel is registered at Phoenix Cottage on the 1939 register and remained at Phoenix cottage until her death in June 1952.