The following are entries in the quarter sessions held four times a year. 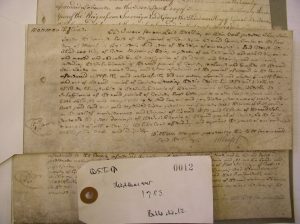 1727 – 27th October
John Price of Goytre for profaining the Lord’s day by playing bowls.
Morgan Williams for being a nuisance with goats.
Lucia Willi Edwards Goytrey for speaking scandalous words of Martha Andrews.
Catherine Edwards for speaking scandalous words of Esther Edwards.
Rachel, wife of John David for a common disturbance of the peace.
Morgan Williams for profaning the Lord’s day by playing bowls.
Lucy, wife of William Edwards for defaming against Martha Andrews.

1729
Walter Morgan for destroying fish with the rods in the Brithin brook.

1738
Catherine Edwards spinster, late of the parish of Goytrey for defamation of Esther Edwards.

1749 – 12th July
Cecil Edwards of the parish of Goytrey widdow, for trespass in keeping11 goats in woods meadows and pasture ground of Francis Jenkins esq., and several grounds of people and commons and highways within the said parish to common nuisance and damage of her neighbours.

1759 – 11th July
Margaret, wife of James Howell of the parish of Goytrey for breaking open the house of Walter William with an intent to steal the goods and chattels of the said Walter William Jenkin.

1763
Elizabeth, the wife of David Valons others Valont (Valentine) late of the parish of Goytrey indicted for assault, John Jones presented.

1769
John Jones, yeoman of the parish of Goytrey for threatening William Arthur, the chief constable of the Abergavenny Upper Division.

1770
Ordered that John Jones, parish of Goytre, parish of Goytrey, having submitted to a presentation processed against him by Philip Arthur for an assault, be fined 6d, which was paid to the sheriff in court.

1772
Ordered that the dwelling house of Miles Edwards of the parish of Pantague. Benjamin Andrew of the parish of Goytrey and Thomas Moses of Monythusloyn be licenses for Protestant dissenters called Presbyterians to perform divine worship.

1776
Thomas Jones, late of the parish of Goytrey, yeoman, for forcible entry and detainer, Mary Williams, widdow presented fined 1s which was paid to the sheriff in court.
Edward Jeremiah, charcoal collier, assault on Edward Williams.

1779
Walter Morgan for fishing in the Brythin brook with the rods and also at Monkswood.

1781
William William, parish of Goytrey indebted to our sovereign Lord the King in the sum of £20.

1782
Rachel, wife of Michael Lewis for not obeying ? Richard James, chief constable presented.
Ordered that John Morgan, parish of Goytrey, in this county, having sworn that he is seventy years and upwards be discharged from serving on juries and that he has his justices.
Thomas Lewis, parish of Goytrey, labourer, acknowledge himself indebted to the sovereign Lord the King in the sum of £20.
William Morgan of the same place £10 on the condition that Thomas Lewis tries his ? to a bill of indictment presented against him by Morgan Evan for an encroachment in the parish of Goytrey at the next quarter sessions, to be called this county with notice being given to the prosector.
Ordered that William Andrew of the parish of Goytrey, be released from serving on juries having sworn he is seventy years of age and upwards.

1783
John Jones, the younger, tailor for £5 for not maintenance paid by the parish to maintain his wife and family after he deserted them.
Ordered that John Jones parish of Goytrey, tailor be committed to the custody master of the house of correction for ascending from his wife and family and to be whipped next Friday at the whipping stock in the town of Usk and discharged and that the indictment found against him by the grand jury at this session quartered insufficiency
William Williams, overseer of the poor for not paying his county taxes.

1788
William William, overseer of the poor for not paying the county stock, Richard Thomas, accountant presented.

1790 – Michaelmas
William Jones farmer and John Jones carpenter for not bringing in their land tax assessments.

1806 – Midsummer
Richard and James Jeremiah, labourers presented for stealing 2 cream cheeses to the value of 6d from Joseph Hoskins.

1812
Richard Williams, labourer and John Jones, yeoman, owing the sum of £20 each if they do not appear at the next quarter sessions.

1826 Epiphany
John Morgan convicted of being a rogue and a vagabond.