1783 – sale by the trustees of Hanbury Williams, of all that farm called Goytre Farm, 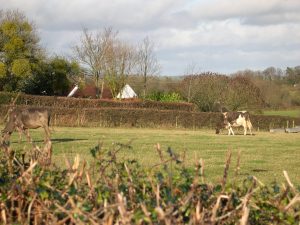 messuage, outbuildings, about 86 acres of arable and pasture, situated in the parish of Goytre, now in tenancy or occupation of Richard Williams at a yearly rent of £28.

Occupying the house on the census of that date is William Williams aged 50, an agricultural labourer, Hannah his wife also 50, and their 15 year old son William.

William and Hannah Williams remain at Goytre Farm for the next twenty years; by 1871 they had left Goytre Farm to live at Bwrgwm Cottage with their daughter Caroline.

In October 1874 a sale of Live and Dead stock was held at Goytre Farm.

On the 1881 census George Grenow is in occupation, he is a 51 year old farm servant, his wife Eliza is 44 and they came from Hereford.

The electoral register of 1894 says William E. Thomas of Nantyderry Refreshment rooms is holding the lease.

John Rees holds a farming sale in August 1902, he remains at Goytre Farm and on the 1911 census he is 71 years old, a farmer born in Mynyiddslwyn. Staying with him is his 12 year old grandson Arthur Evans, his housekeeper is Hettie Hughes from Cardiff, and 25 year old Edgar Phillips is a waggoner on the farm.

John Rees had left by 1921 as David Thomas was now holding a sale at Goytre Farm, he was giving up the tenancy. 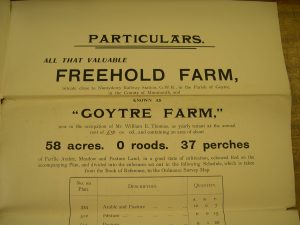 George Bandfield died at Goytre Farm in 1931, he was 42 years of age and well known in Usk and left a wife and three children.