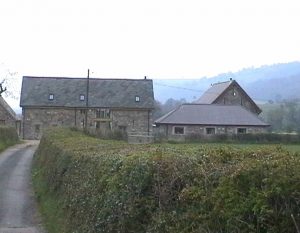 A letter to the Rector dated 7th May 1763: John Andrew and Mary Summerfield asking him to publish the banns for their marriage, they were married on 3rd June 1763.

Thomas Jenkins in 1778 was overseer of the poor for his own lands, Ty Poocha.

The next mention is in 1821 where John Williams of Ty Pooka is on the assesors list, but in 1829 William Morgan is paying £2 land tax for Ty Poocha, the occupier is William Evans.

By 1841 the occupier has changed to John Lewis who is living at Ty Poocha with his wife Elizabeth, they are both aged 45.

John Lewis had left by 1851,  the census of that date says William Summerfield is now the occupier with his wife Rachel, William is  55 and Rachel is 52. Living with them at the time of the census is Elizabeth James, a widow, born in Goytre, and her two children Elizabeth and Ann, both born in Surrey; David Daniel from Panteg who is visiting; William Jones, 64 of Kemmys is a farm labourer; and their house servant, 17 year old Sarah Jones from Llanover.

William Summerfield died in 1857 aged 60 and was buried at St Iltyd’s church Mamhilad. Following the death of William, Rachel took over the Bailey Glas Inn at Mamhilad and remained there until her death in 1887.

John Phillips died in June 1864 followed by Ann in July the same year, they were living at Mamhilad Villa at the time of their deaths.

On the 1866 Electoral Register William Turner has the land at New Barn as occupier, Lewis Edmund wrote in his diary in January 1871 “at Wm Turner, New Barn, whitening inside”,  for which he was paid 4s.

The 1871 census says William Turner is 79, a farmer of 60 acres and was born in Warwick. His son-in-law is William Jones, 46, a farm bailiff and married to William’s daughter Frances, they have four children, John Henry 17, working on the farm, Catherine Frances 15, George 11 and William 7. The same year William Turner is mentioned as an overseer of the poor for the parish.

William Turner died in March 1874 and was buried in Lanvair Kilgeddin.

In 1878 the occupier is William Jones, the son-in-law of William Turner. Lewis Edmund once again wrote in his diary “at William Jones New Barn Goytrey repairing the barn and stables”.

On the 1881 census William Jones and his wife Frances are living at New Barn with their children Henry 25, Catherine 23 and 17 year old William, they are all employed at the “House of Fraser”.

By 1885 Thomas Jenkins is now living at New Barn, he is an overseer of the poor for the parish, in 1887 he appeared as a witness for a welsh speaking vicar, this was after the death of the Rev. Thomas Evans, when the parish was looking for a new Rector.

The census of 1891 says Thomas Jenkins is aged 30, a farmer born in Clytha, Annie his wife is 29 and was born in Shrewsbury, and their children are Annie 6 and Ada 4.

In September 1895 their 15 month old son Edward died and was buried at St Peter’s.

Thomas Jenkins remains at New Barn and in 1901 Annie is a telegraph learner, Ada is 14, and they have a son Iltyd who is 3 years old. Their farm servant is 40 year old Edward Cole from Cheltenham.

The census of 1911 gives more details than any previous ones, Thomas and Annie Jenkins had been married for 27 years, they had 5 children, two of which had died (Edward and Ada) the children living at home were Iltyd who is now 13 and Ivy Phyllis, both were attending school. They have their farm servant, Charles Thomas who is 28 from Abergavenny.

The poor rate of 1914 states Thomas Jenkins is now the owner of New Barn.

By 1938 Thomas and Annie had moved to Cantref Bungalow, a short distance away from New Barn, Thomas died in 1940 (reported in the Free Press) and Annie died in February 1952 aged 90, both laid to rest in St Peter’s Churchyard.

Living at New Barn in 1938 were Arnold Herbert and his wife Elizabeth.

New Barn was sold in July 1944 to Gomer Edwards.