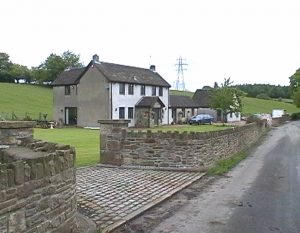 Sarah Hughes remained at Nightingale Grove, and on the 1851 census she is a 65 year old widow, a pauper, her daughter Ann is 30 and a charwoman, Rachel is 25 and still at home, her grandchildren Robert 8, William and Eliza both 5, and 2 year old Eliza are living with her.

The 1852 parish assessment says Nightingale Grove is 203 on the parish map and contains 8 perches.

Sarah Hughes left the property sometime after 1861 and William Gough takes up residence, he is 32 in 1871 and a farm labourer born in Lanvair Kilgeddin, his wife Ruth is 35 and born in Mamhilad, their children are Lueza 6, William 4 and Albert 3.

There are records of two children being baptised in 1893 at St Mathews Church Monkswood, Thomas John Price and Hilda Ellen Price, they are the children of John and Martha Price of Nightingale Cottage Goytre.

The owner on the tithe update of 1889 is Isaac Jenkins, the occupier is John Lewis, although at some time Isaac Jenkins went to live at Nightingale Grove as he died there in 1898 aged 77 and was buried at St Mathews Church Monkswood. His wife Ann remained there and died in March 1900 aged 81, she was also buried at Monkswood.

Nightingale Grove was offered for sale on the 21st February 1902 (full advert in the Free Press) the tenant is Mr Albert Owen paying £7 yearly rent and also paying rates and taxes, included are two adjoining gardens, in the ownership of the Marquis of Bute at a yearly rent of £1 2s 6d the land tax is 11d.