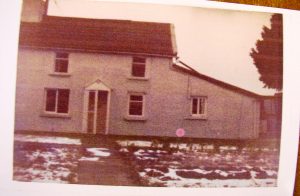 I knew this little cottage very well in my youth as it was owned by my aunt and uncle. My cousin told me it was named after the Castle Pear Tree in the garden.

Castell was number 395 on the 1841 tithe map and contained 3a 2r and 28p, consisting on 4 fields, meadow, the meadow, cae canol and cae wry y canol. The owner was the Earl of Abergavenny.

Although Castell was built many years before, the first fact I can be certain of is a lease dated 1807 to William Morgan for the lives of Ann Phillips 60, her son William 26 and Elizabeth his wife 31. William Phillips married Elizabeth Thomas on February 22nd 1807 at St Peter’s Church, several children were born, William, John and Ann.

In 1819 William Phillips was the constable and on the 1821 Earl of Abergavenny survey Ann Phillips was listed as holding the lease of a cottage and garden.
Elizabeth Phillips died aged 41 and was buried at St Peter’s Church on April 30th 1828.

In 1836 Ann Phillips aged 89 of the Castle was given 2/6 weekly by the overseers of the poor as long as certain arrangement exist between her son and the parish overseers for the occupation of a house and land and “he to bind himself to pay them £5 yearly.”

A new lease was granted to a William Phillips in the year 1838 for the lives of lessee, William, son of Thomas Newman, Goytrey, carpenter, aged 6, John, son of Paul Hughes, Lanvair Kilgedin.

On the 1841 census William is aged 25, a woodcutter, Elizabeth his wife is 25 and their children are Daniel 4 and Mathias 9 months.

William and Elizabeth’s daughter Hannah died in 1864 aged 22 and was buried at St Peter’s Church on October 14th.

In December 1864 William Phillips was taken to court by John Waters of Vine Tree Cottage, Goytrey (the cottage directly opposite) for £1 7s 8d.

Mathias Phillips is by 1871 the head of the household, he is 30 and married to Eliza who is 41, living with them is his brother William and step-child William 13 and Alfred Easten aged 11.

The lease is now held by Col Byrde, the rateable value was £3 10s.

Mathias Phillips stays at Castell until 1889 when he moves over the road to live at Vine Tree.

On the 1901 census at the “Old Castle” are Charles and Elizabeth Watkins, Charles is 74 and born in Goytre and Eizabeth is 78, a widow from Swansea. There is a burial for Elizabeth Watkins in July 1907, she is aged 84 and from the Old Castle.

By 1911 the new occupier is Stephen Cutter aged 55, a hay ruser on a farm, he was from Ross, his wife Mary 51, was from Lanvair Kilgeddin. Stephen Cutter remains at the Castle and in 1920 he is paying the Earl of Abergavenny £315s rent for the cottage and 3a 1r and 34p of land.

The electoral register of 1924-26 gives Leonard Trehern as the occupier, from 1930-35 Harold and Florence Ball and in 1935 after their marriage the Castel was purchased by John and Esmerelda Lewis from his sister Florence Ball, they remained at the Castle for 50 years.