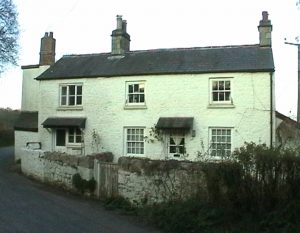 Documents show that he kept it in his own occupation until he first let it, the first mention of a separate family living there is on the 1871 census when the Morris family from Hereford were mentioned.  Thomas Morris is 29, a hoop maker, Anne his wife is 26, born in Garway, Roseanna 7, was born in Grosmont, Albert 4 and Ada 1, were born in Ewas Harold.

The Morris family had left by 1881 as the new occupier is Thomas Jenkins who is 78, Hannah his wife is 62, their daughter, Elizabeth Hutchinson is 27, David Hutchinson is 27, a labourer. Living with them also is their granddaughter Annie Williams, all the family being born in Goytrey.

The family had changed again by 1891 when John Williams, a widower, working for GWR is living there with his daughter Rachel, they were both born in Goytrey.

John Williams remains at Saron and the 1911 census says the property has 3 rooms, he is now 72, a woodcutter, and he has a housekeeper, Alice Meredith.

The electoral register of 1915 says John Williams is still in residence, but this has changed by 1923 when William Thomas is now in occupation, this had changed by 1935 to Elizabeth Martin.

On the 1939 register the family are Albert and Vera Alexander, Albert is a general labourer born in 1907, Vera was born in 1909.

After the war Harold and Elizabeth Fleming occupied the property, later moving to the village.