For many hundreds of years Abergwellan was in the parish of Goytre. 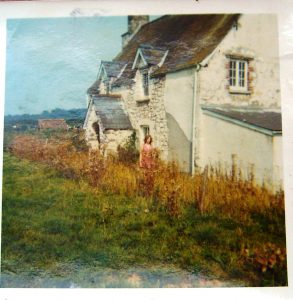 From 1690 to 1724 Abergwellan was used as a non-conformist meeting house. In 1724 the meeting house was moved to the Wern.

In 1755 Thomas James was overseer of the poor for Abergwellan

From 1808 until at least 1829, David Francis was the constable and occupier. Iltyd Nichols was the owner and paid land tax for the property.

Sometime in the 1840’s William Gwatkin (son of James) became the tenant, the rateable value was £10 15s. William married Eliza Williams on the 8th May 1845 at Monkswood Church. Eliza was the daughter of John Williams, a hoopshaver. In 1850 William added his name to a list of Goytrey parishioners who were voting against the police. By the 1851 census the family had increased by two children, Edwin 4 and Ann 1. Another son William was born in 1853 and at this time William was also listed as overseer of the poor for Abergwellan.

In 1853 Abergwellan was given to Lady Mary Wyatt as part of her marriage settlement. A recent law had been passed where it stated that each county had to have it’s own reformatory and in 1856/7 there was a draft lease drawn up by Iltyd Nichols, Benjamin Hall, Col Byrde and others to turn Abergwellan into the reformatory for the county. A petition was drawn up against this and Lewis Edmunds the local builder from Llanover wrote in his diary on the 28th January 1857 “about the parish of Goytrey with a petition about the proposed new reformatory school and collected 91 names.”

In 1855 John Preece became the new tenant and on the 1861 census he is living with his mother-in-law Elizabeth Lloyd aged 64, a farmer’s widow. John is 44 and a farm bailiff born in Hereford, Elizabeth his wife is 32 and born in Gloster, their children are William 7, John 5, Thomas 3, and Elizabeth 1. Also living there are John’s brother Samuel who is 20, and a servant Mary Morris born in Goytrey.

More children were born and baptised at St Peter’s Church, Henry in September 1863, Emily Margaret in November 1866 and May Sarah in May 1868.

Edmund Lewis wrote in his diary in 1868 that he spent May to July working on the outside of the house and again in 1873 when he put the crest on the barn and also spent time repairing the house and stable.

John Preece died in May 1875, Elizabeth his wife died in 1882, they were buried at Chapel Ed Goytrey.

The owner of Abergwellan (freehold house and land) is listed on the Electoral Register as Sir Mathew Digby Wyatt. (His death is recorded as the 21st May 1877.)

The new occupiers in the 1881 census were John Jones 52, born Carmarthen, his wife Elizabeth 54, and daughter Elizabeth 14.

There is an indenture of conveyance to Lady Llanover from Lady Mary Wyatt in 1886.

On the 19th March 1887 John Jones appeared as a witness for a welsh speaking vicar for the parish of Goytrey, in 1888 he becomes a tenant of Lady Llanover.

The 1901 census says John Jones is aged 57, daughter Elizabeth is 34. A son Thomas Evan is born on the 11 May 1901, he later attended Llanover school. John Jones died and was buried on the 6th February 1907 at Llanover.

The 1911 census gives a little more information than previous and says Abergwellan has 4 rooms and living there was Emma Jane Jones 44, a farmer’s widow, Thomas 9, Mary 5, and William Sadler, a boarder aged 40, a woodcutter.

An article in the Free Press tells the story of Thomas Evan Jones’ achievement of a Master’s degree, this I have put separately. Another article is that of an accident in 1936 involving John and his mother Emma.

Thomas married Irene May Evans on the 13th September 1940 at Llanafan, Builth Wells.