Thomas Jeremiah was born in Goytre on May 21st 1797, one of twelve children of Richard and Mary. 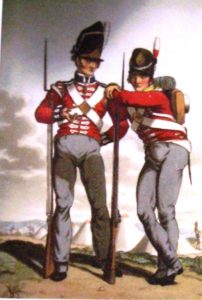 him giving a short account of his life and adventures.

“I was born of poor but honest parents, my father kept a little farm of about 180 acres under Squire Leigh of Pontypool. My father kept the farm for about twenty years in the parish it was called the Goytre Halls, where I was born. I was a rebellious and unsettled youth and went into service with several farmers but was eventually much taken by the “Gallant sons of Mars” who were stationed at Abergavenny.”

At the age of sixteen years and six months he enlisted in the Royal Welch Fusiliers in Abergavenny on November 27th 1812. He went to the continent on March 23rd1815.

He has written an account of the Grand Review of allied troops on June 18th 1815 and the ensuring battle of Waterloo.

He served in the Royal Welch Fusiliers for 25 years.

“A Short Account of the Life and Adventures of Private Thomas Jeremiah, 23rd or Royal Welch Fusiliers 1812-1837, including his experiences at the Battle of Waterloo.” Is a lovely little booklet edited by Gareth Glover and printed by Ken Trotman publishing.