In 1841 Chestnut Cottage was owned by T E Cooke and the occupier was William Watkins, he was paying 10s per annum with a rack rent of £2 10s.

At a parish meeting held on the 11th March 1847 it was agreed to reduce the assessment of Thomas Jones’s property by £2 and put it on the cottage of Thomas Watkins.

The next mention is that of Elizabeth Hughes and her son John, a gardener, who were living at Chestnut from 1861 to 1872. Elizabeth died and was buried at Mamhilad Church on 30th May 1872.

An advert in the Free Press on the 3rd November 1877 says there is a sale of household goods and effects for sale at Chestnut Cottage on instruction of the owner John Lewis who is leaving the property.

John Jones then became the occupier and in 1881 he was living there with his wife Elizabeth 59, Isabella 19, and Isaac Jones their grandson.

Isabella married William Lindsay in 1894 and on the 1901 census they are living at Chestnut Cottage with their children Elizabeth 5, Emily 3, and Margaret 2. Isabella was baptised as an adult on 6th April 1906 at St Peter’s Church. More children were born, Agnes and Laura both being baptised in 1905 and a son Francis who died in 1907 when he was 10 months old.

A tragedy struck in 1909 when Emily aged 9 had a terrible accident and drowned in the canal when walking to Pontymoile to meet her mother. In the same year William Lindsay died aged 43. In 1910 Isabella had an illegitimate daughter and called her Winifred Edith. Isabella continued to live at Chestnut with her children. 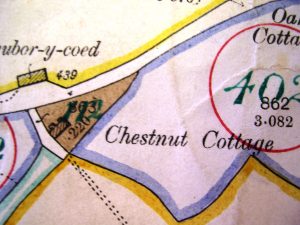 The gross value of Chestnut Cottage was £4 10s and the rateable value was £3 10s.

In 1918 Alfred Adam Williams was the owner and he sold the property to Edward Henry Charles of Park-y-brain for £85, the tenant was still Isabella Lindsay, paying 2s rent and land tax of 1s 9d with the commuted tithe being 4d.

I checked the electoral records as there are few other records are available after the 1911 census and found that Isabella moved to Woodland Cottage Llanvihangle Pontymoile where she died aged 56 in December 1927 and was buried at St Peter’s.

Over the following years Chestnut was occupied by George Mills and his wife Elizabeth from about 1920 to 1927, followed by Edwin and Doris Price from about 1930.