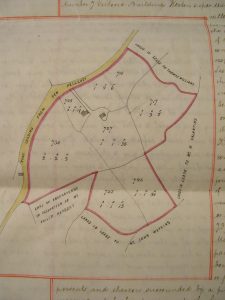 Edward James died in October 1836 and was buried in St Peter’s churchyard. The new occupier was John Tuffley but the lease was granted to the Rev John Evans, the vicar of Llanover.

On the1841 tithe the owner was the Earl of Abergavenny and the lease for lives by the Rev John Evans, the occupier was John Tuffley.

William Jones and his family became the new occupiers and on the 1851 census he was aged 43, a plasterer, and was born in Cwmcarven. His children were Thomas 10 and William 8. Both children were born in Llanover where William Jones was then living with his wife Mary, a dressmaker.

In 1852, Lewis Edmund wrote in his diary “at the Rev John Evans whitening for Wm Jones.” The same year, on the vicar’s tithe account is written “William Jones of Maesyberyn, 10a 2r and 34p.”

About 1855, John Herbert Gwyn Owen (he was the solicitor who defended John Frost in the Chartist Riots) took the tenancy. The leaseholder was still the Rev John Evans of Llanover, the connection being that Mr Owen was living with Mrs Kingston, who was the daughter of the Rev Evans, by whom he had two sons.

John Owen had taken the lease in his own name by 1860 on the lives of Clara Thackwell, daughter of James Seabright, Thomas Howell of Gloster aged 20 and his two sons, David 8 and John 10. John Owen and family were not living here but at Goytrey Cottage (Oak Cottage.)

John Owen collapsed outside Pontypool Town Hall in 1864, the same year Maesyberyn was occupied by a Mr Williams.  In 1868 an advert in the Free Press was placed for the sale of the lease at the Crown Hotel Pontypool on the 9th January. The advert mentioned the lease was still in the possession of Mr Owen, the annual rent was 10/- and the land contained 23acres 15rood and 11perches. On the 1870 land tax, Maesyberyn was rated between £12 and £50 pounds and the occupier at this time was John Williams.

On the 1871 census John Williams is aged 46, a teacher, born in Hereford. Ann his wife is 41, born in Grosmont and his daughter Mary is 16, a dressmaker, and was born in Llanvetherine.

In 1879 John Griffiths was named on the electoral register for Maesyberyn and in May 1891 Henry Chalken took the lease, he was aged 64, a gent, born in Middlesex, his wife Susanna was 56, who was born in London. 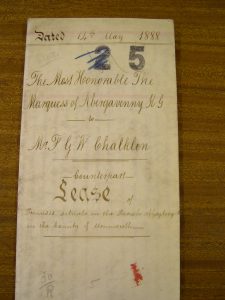 Henry Chalken remained at Maesyberyn and on the 1901 census he was aged 74, his wife Susanna was 66, his sister Sedley was 76 and their servant was Rachel Jenkins 24, born in Goytre.

By 1911 James Griffiths, a station master aged 61 from Radnor along with his wife Annie, also 61 were living at Maesyberyn.

The Earl of Abergavenny sold many properties in 1921, Maesyberyn was included, being lot 24 – A house with pasture and orchard lands, in the occupation of James Griffiths containing 10a 3r which was in lease to Mrs E Williams. The land was purchased by Richard Davies for £230.

By 1927 Elias Francis Morgan had taken occupancy of Macs-y-beran, he died in on the 14th January 1934. He was a retired builder and left the gross sum of £20, 452.
In his will he left various bequests to his three sons, to Wyndham, £1,200, and a property called Thistle Park. To his son Thomas John Morgan, Macs-y-beran and 4 more properties in Crown Street Crumlin. To his son Stanley Adin Morgan he leaves Goytre House Farm and a specified house. To his grand-daughter Mary Catherine Edmunds he leaves £300 and to his housekeeper, Edith Mary John, £150.

There is an obituary for a Mr Charles Morgan of Maesyberyn who died in 1935, a native of Abercarn.