In May 1778 Edward, the son of Edward Jeremiah, a collier, is baptised at St Peter’s Church. 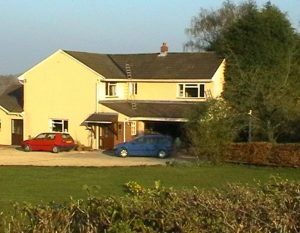 Two years later, in 1780, Martha, the wife of Edward Jeremiah, collier, died and was buried in St Peter’s churchyard, this is followed in 1781 by the death of Edward and Martha’s daughter Elizabeth.

In September 1797 Edward Jeremiah takes a lease from the Earl of Abergavenny for a dwelling house and 5 acres, the document states that Edward Jeremiah is already in occupation of the property, Edward is 36, the lease is for the lives of Richard 10 and Philip 7, the sons of Edward.

The overseer of the poor records in 1798 show Edward Jeremiah has been appointed assessor of the highways for the parish and is paying land tax for the Earl of Abergavenny’s property.

On the 5th June 1818 the church records shows that Benjamin Jeremiah aged 20 of Pwllmeyric was buried at St Peter’s churchyard.

The Earl of Abergavenny’s survey of his properties in 1821 show Edward Jeremiah still in occupation of Pwllmeyrick.

The tithe of 1841 shows Richard, the son of Edward Jeremiah in occupation of Pwllmeyric, he is holding 4 acres, 1 rood and 14 perches, and paying the rector 14s 7d tithe money.

Pwllmerick is missing on the 1841 census so I am unable to give any further details.

I have searched for the death of Edward but cannot find a burial for him.

Richard Jeremiah has moved with his family to to Trevethin by 1851 and Jane Williams, a 55 year old widow from Bristol with her son John, 25 are farming 6a at Pwllmeyric.

The census of 1861 says Charles Watkins is 43, an agricultural labourer, Elizabeth his wife is 47, they have twins, Margaret and Elizabeth aged 9, sons Charles, 5, John 3, and Thomas 2, they were all born in Goytrey.

By the 1870 land tax for Pwllmeyrick was the responsibility of Rev Thomas Evans, rector of Goytrey. So at some point he acquired the lease from the Earl of Abergavenny.

Charles Watkins is still occupying Pwllmeyrick on the census of 1871, he is 54 and now a farm bailiff, Elizabeth, his wife is now 42, she was born in Glamorgan, son John is 11 and a scholar, their daughters are Sarah 9, Ann 6, Emily 5, and a son Arthur who is 3.

Charles Watkins remained at Pwllmeyrick until sometime in the 1880’s. On the census of 1881 he is now a 69 year old labourer, Elizabeth is 59, the only child at home with them is Arthur who is a scholar.

A new family has taken occupation by the census of 1891, the head of the family being Thomas Morgan born in Llanfrechfa, he is 37 a farmer, Jane his wife is 38 and was born in London, their children are Jane, Horace, Harry, and David.

The 1901 census gives Thomas Morgan’s occupation as a market gardener, Jane is now 50, their children, Horace 17, is a domestic gardener, 15 year old Henry is a truck haulier (hawker), Ethel is 13, David 10, and 8 year old William.

In April 1906 Thomas Morgan was fined 5 shillings for allowing his cows to stray on the highway.

Horace Morgan married Florence Bowen (Oak Cottage) in February 1907. They are living at Pwllmeyric on the 1911 census, Thomas and Jane have left to live at the “New House” (the Croft).

The census states Pwllmeyric has 4 rooms, Henry is now 25 and a GWR platelayer, Florence is 24 married for 4 years and they have two children, Ruby 2 and Eileen 1 month. In 1917 their one month old son David died and was buried at St Peter’s churchyard, Goytre.

The Earl of Abergavenny’s sale of his properties in 1920 gives the following details:

A cottage and buildings of 4 acres, 1 rood and 23 perches. It is freehold subject to a life of 64 years, reserved rent of 2 shillings, tithe 10s and 3d. The property was sold to James Ball, Goytre, for £410.

In 1924 the names on the electoral register had changed once again to the previous tenants, Thomas and Mary Jane Morgan, who remained there until their deaths.

September 1932 saw the golden wedding article in the Free Press of Thomas and Mary Morgan, who were married in September 1882. 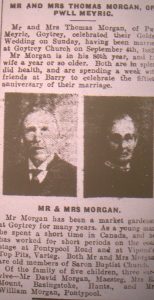 Another Free Press article in 1939 says Mrs Mary Jane Morgan of Pwllmeyric had an accidental fall which accelerated her death, she was 88 years old. This was followed in October the same year by the death of Thomas, he was a deacon at Saron Chapel.