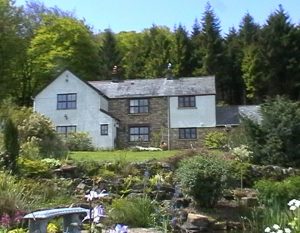 The original owner was the Earl of Abergavenny

The first mention I can find is in 1771 when James Jones, a pauper of Woodland Cottage was buried at St Peter’s church.

A document that says it was late in the possession of Mary Frederick, a pauper, commonly called Mary James, widow; she was buried at St Peter’s on October 6th 1778

After Mary Frederick’s death the lease is held by William Jones for the lives of William 26, Vaughan 17 and Charles 15. William Jones still holds the lease on the 1821 Earl of Abergavenny survey.

Ruth married John Hart in 1845 and they lived in John Rosser’s house (no. 11 on the 1841 tithe) which was very close to Upper Woodlands.

Henry and Gwellian are still at Upper Woodlands on the 1851 census, Henry is aged 60, a labourer born in Llantrissant and Gwellian is 59 and also living with them is their daughter Elizabeth aged 19.

There is a report in the Usk Observer in February 1859 in which Henry and Elizabeth are charged with trespass on the land of Henry Bird and fined 10s. The fine was paid by his employer Samuel Harris of Gwenffrwd factory.

On the 7th November 1859 Elizabeth married Robert Williams a widower aged 39 of Llanover; the witnesses were Richard Pruett and Elizabeth’s father, Henry Lewis.

By 1861 there was a new occupier, William Jones aged 28, born in Llanvair, Mary Ann 22, born in Rhymney and their 4 months old son John born in Goytrey.

By 1871 this had changed once again to Rachel Davies as head of the household, she was maintained by her son Francis who was 28, born Goytrey, and her 12 year old granddaughter Margaret Wood.

On the 1881 census Walter Jones aged 65, a woodward, and Mary his wife 51 born in Scotland were living at Upper Woodlands. Walter Jones died in June 1900 aged 84 and was buried at Blaenavon.

The 1891 census gives John Williams 49, a woodman born Llanover and Mary his wife 42, married for 6 years and have 3 children, Alice, William and Ivor all born in Goytre.