Ty Nant is now in the parish of Llanover.

Lease no. 199 granted on 29th September 1792 by the Earl of Abergavenny to George Pritchard for the lives of Mary his wife and Thomas or James Lloyd aged 4 years, the rent is 1s 3d and the Herriot is 5s 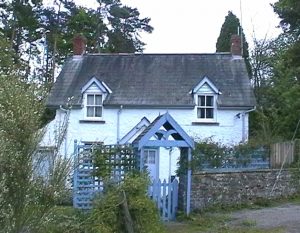 On the 1841 census George Pritchard is still holding the lease but the occupier of Ty Nant is Joseph Marsh. Joseph is aged 55 and a labourer, his wife Mary is 60, he has three daughters, Martha 35, Margaret 25 and Elizabeth 15 and a son John who is 25.

Joseph Marsh remains at Ty Nant and  in 1852 he says he occupies a cottage and garden at Rhyd-y-meirch, no. 82 on the parish list and the garden is 2 perches.

By 1861 Mary Marsh had died but Joseph, who is now 77, is still working as a labourer. Along with his unmarried daughter Martha who is 55, they have several lodgers living with them, Jane Mathews, 64 who is a pauper, and Capel Morgan 53 and his wife Joan who is 59.

There is a letter dated 7th October 1869 saying James Lloyd, the last life in Pritchard’s lease has been dead for a year or more since Pritchard has had the cottage.

This may account for a new occupier in 1871, Henry Lewis aged 32 a blacksmith. Henry was born in Hereford, he is married to Margaret who is aged 27 and born in Monmouth, their two children are Elenora 3 and Lizzy 6 months.

On the 4th March 1873 the Earl of Abergavenny sold Ty Nant to Lady Llanover, he also wrote to her saying there are arrears of rent on the property amounting to £6 18s 9d. 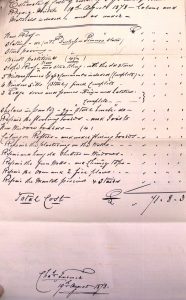 Elias Jenkins died at Ty Nant in 1886 and was buried at Llanover church, his wife Sarah appeared in 1887 as a witness for a welsh speaking vicar for the parish of Goytre.

Goytre tithe and income tax for 1888 was paid by Lady Llanover but no tenant was mentioned on the document.

Sarah Jenkins remained at Ty Nant, in 1891 she was 44 years of age and a widow, from Brecon. Her son William is 13 and an agricultural labourer, her other children are David 10 and Elizabeth 5, she has two lodgers, David Williams 20 and Thomas Jones 21, a gardener. 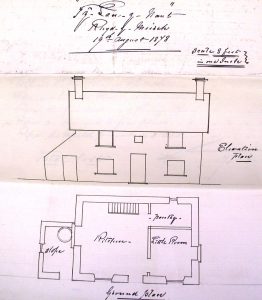 By 1910, Alfred Randall has moved into Ty Nant. The owner is Herbert and the gross value is 4s and the rateable value is 3s. The 1911 census gives more information about the Randall family, Alfred is aged 23 and a cowman, he was born in Pucklechurch and living with him is his mother Eliza who is a widow aged 50 who was born in Peterchurch.

Finally, in 1944 the land tax says the owner is Herbert and the occupier is D Evans.