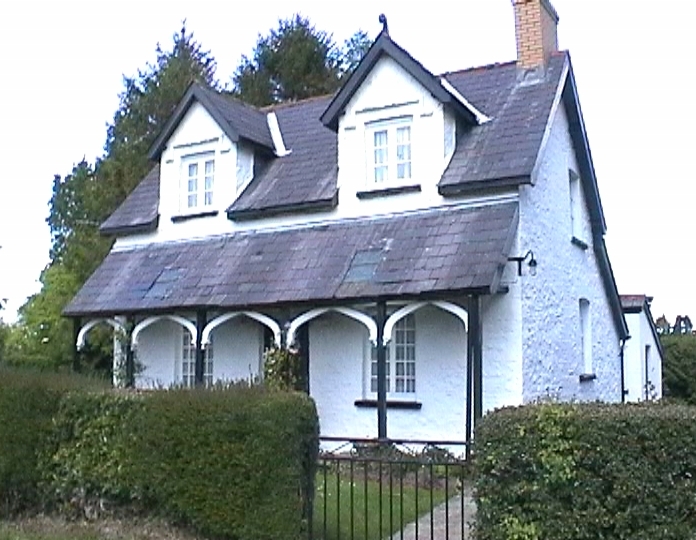 This beautiful farm house is now a listed building.

Edward James is holding a lease from the Earl of Abergavenny for Goytre House Farm, he is paying land tax in 1806 but the lease is dated 1807, he is 50 years old, also mentioned are William, 15 and daughter Elizabeth, 13 who are lease for lives.

Although he was holding the lease, Edward James was not living at the property; that was Catherine Jenkins (nee Morgan) who married Roderick Jenkins in 1782.

This is the same Catherine Jenkins for whom the overseers of the poor took the decision to build a house at the expense of the parish, and on land belonging to the parish, for her to live in. (Edward James shared in making that decision.)

Catherine moved to the house built by the overseers, Nyth Catty, where she died a pauper in 1812.

The 1821 parish survey shows Edward James holding lease No. 60 from the Earl of Abergavenny.

The census of 1841 shows a new family in occupation, William Tuffley, he is a 35 year old farmer, Hannah his wife is 45, they have three children, James 10, (James is living at Blaengwenffrwd Farm, Upper Llanover where he is employed as a farm servant,) William 8, and Hannah 3.

Hannah was baptised at St Peter’s church on January 19th 1838, her parents’ names are William and Anna Mariah.

The tithe of 1841 gives the owner as the Earl of Abergavenny and Rachel Jenkins holding the lease of a cottage and 3a 1r 3p, paying 9s 2d to the rector.

In 1841 William Tuffley, a 35 year old farmer and 45 year old Hannah, his wife, along with their children, William 8 and Hannah 3 are living at Goytre House Farm.

In December 1842 William Tuffley was convicted of stealing and leading away a horse, the property of John Meredith of Goytrey. 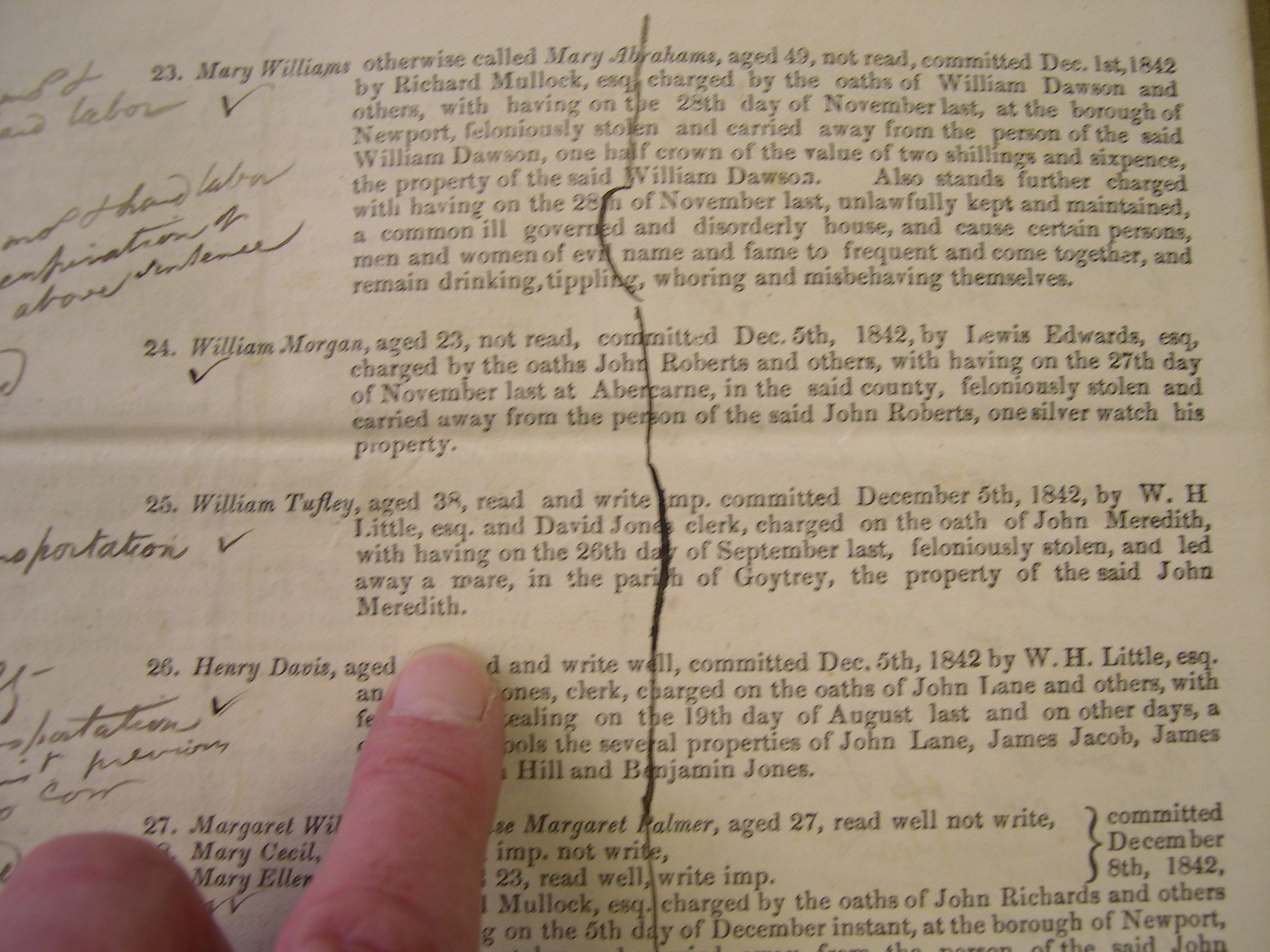 I have searched and found the following about William Tuffley.

After his conviction he was first held at a prison in Wales, then sent to England. His records show he was a model prisoner. From England he was sent to Gibraltar where he served the remainder of his time on a hulk boat, a floating prison. 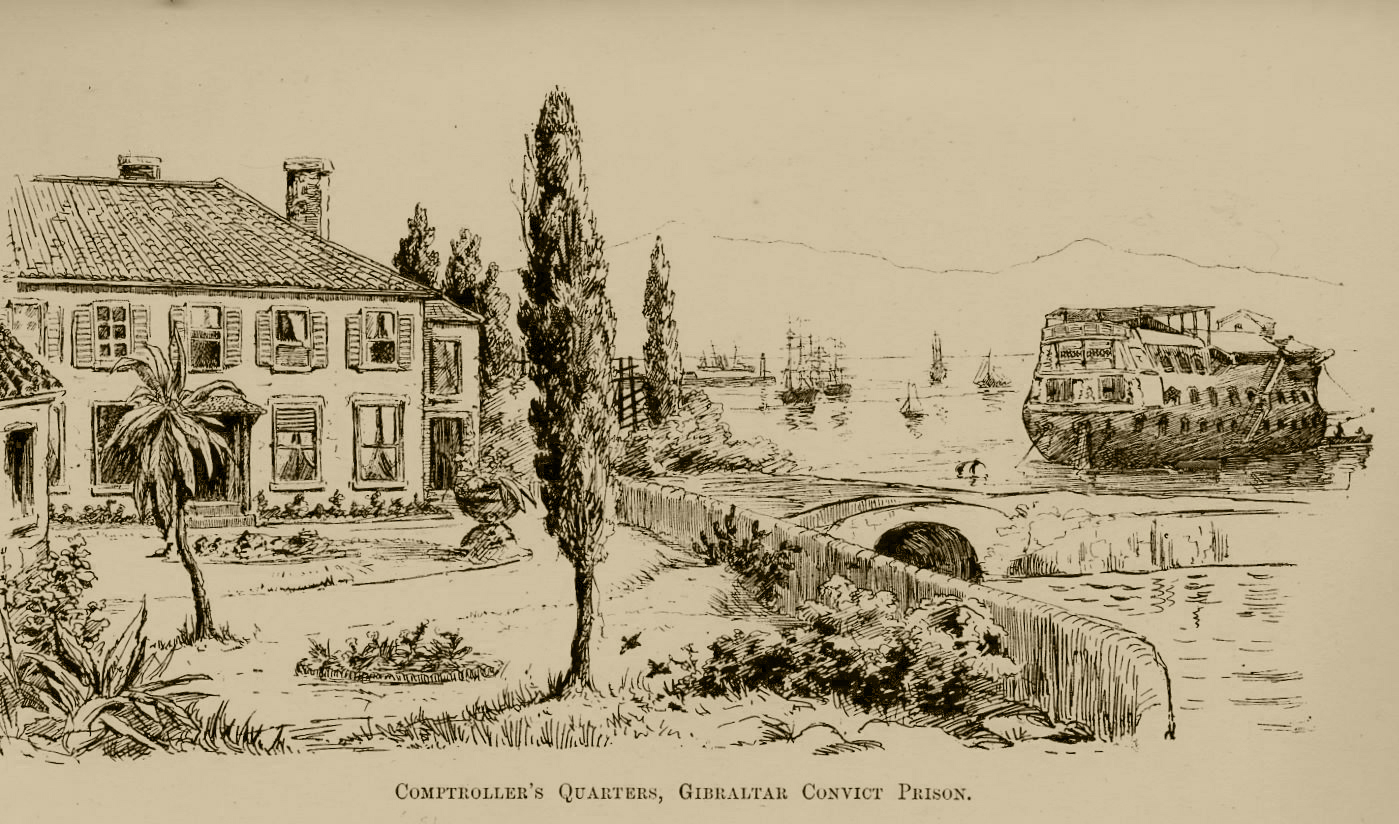 Due to his good behaviour he was given his ticket of leave after 7 years and returned to England. I have found him and his wife Hannah on the census of 1851, they are living in Barton Street, Gloucester, with them is their 11 year old daughter, also Hannah, born in Goytrey.

Daughter Hannah married Charles Dyer and lived in Gloucestershire for the remainder of her life and strangely at a place called Tuffley.

By the census of April 1851, Isaac Wilks and family had moved in to Goytre Farm House. Isaac was a blacksmith, his wife Elizabeth is 28, their children are John 9, Elizabeth 6, William 4, and 2 year old Mary.

In September 1851 Col Henry Byrde takes the lease previously held by James and Rachel Jenkins, for the lives of the Prince of Wales, Alfred Price, and P Arthur.

Isaac Wilks had moved down into the village by 1857 and John Phillips was now in occupation.

The next mention of Goytre House Farm is on the 1871 census. The census of 1861 is missing for this part of Goytrey.

William Jenkins, Col. Byrde’s farm bailiff is now in occupation with his wife Anna. William is 46 and Anna is 41, they were both born in Trevethin, staying with them is their 8 year old nephew, Thomas Turner, also from Trevethin.

A dreadful accident occurred in March 1878 when a horse fell on and killed William Jenkins, whilst coming over Park-y-brain canal bridge.

Anna Jenkins had left the property by 1881 as Col. Byrde’s new farm bailiff is John Jenkins, 51, also from Trevethin. Emily, his wife is 38 from Cardiff, and their children, are John, 15, born in Goytrey, Rachel 13, Elizabeth 10, and Charles 7 who were born in Glascoed.

The census of 1891 says John Preece from Dingestow is in residence with his family, he is 51, and a farm bailiff. Elizabeth, his wife is 49, their children are Mary 11 and Esther 8 and 19 year old William, a farm servant.

Alfred and Mary had another child, Emily Jane, who died when 3 hours old on the 29th December 1903, this is entered in the child death register of Usk.

At the Goytre local produce show in 1905 Mrs Jones of Goytre House Farm took second place with her poultry.

Alfred Jones held a sale of live and dead stock on the 10th May 1907 prior to leaving the premises.

In 1910 Col. Byrde still held the lease, the new occupier is Frank Scudamore, the gross value of the property is £14, the rateable value is £12 5s.

From about 1915 William Edgar Davies was farming here and was in occupation when in 1921 Goytre House Farm is put up for sale by auction at the Angel Hotel, Abergavenny. It is purchased by Mr C F Morgan of Newbridge for £800, the land attached is 19 acres, plus 33 acres leasehold.

William Davies remained at Goytre House Farm until he committed suicide in 1926 when he sadly shot himself in the stable attached to the farm.

Following this from 1931 John William Morgan, Stanley Adin Morgan (from Maes-y-beren) and Lilian Margaret were in residence.

The 1939 register shows Reginald Hamer, a dairy farmer at Goytre House Farm, with him is Florence Prosser and Christmas Edwards; by 1945, Reginald and Florence had married.