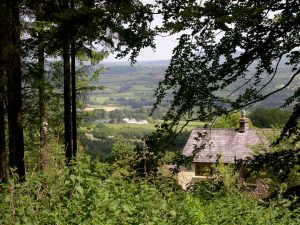 The first mention of this property I can find is a lease and settlement in 1776 on the marriage of Morgan Evan.

The 1841 tithe and census say John Davies is the occupier and Walter Herbert the owner. John Davies is 75 and a gardener, Margaret his wife is 65 (neither were born in Monmouthshire) and living with them is 6 years old Mary Jeremiah.

On the 1852 electoral register Walter Herbert is still the owner and he lives at Pontymoile.

LARCENY BY A FEMALE SERVANT.- Adelaide Powell, a girl about sixteen years of age, was charged with having stolen £1, and one pair of boots, the money and property of her mistress, Mrs Ann Davies, of Goytrey ……. Prosecutor said that in September last the prisoner was in her employ, and on the 6th of that month had been sent to a shop in the neighbourhood for some goods, to pay for which she took a sovereign, and for the purpose of carrying them home had taken a bag.  The prisoner had not been to the shop where directed to go by her mistress, and never returned to her employment.   On the morning of the day in question, witness leant prisoner a pair of boots, with which she also absconded ……. Prisoner said she had accidentally lost the sovereign, which was entrusted to her by husband of witness, and that prosecutrix had given the boots to her ……. The Bench considered that there was no proof that the prisoner stole the sovereign, and for stealing the boots and the bag they should sentence her to one month’s hard labour.

In 1871 Thomas Davies was aged 39 and a farmer of 5a, Ann his wife was 36, both were born in Goytre, their children were Thomas 12, Elizabeth 7, Margaret 5, John 3, and  also living with them was Ann’s mother, Charlotte Cobner a pauper aged 75.

In 1876 another child was born, Sarah Ann, and two years later Ann, the wife of Thomas Davies a lime burner aged 44 was sent to the Abergavenny Asylum on the authorisation of Thomas Evans JP,  suffering from acute mania. The asylum record says she was feeble. She was discharged on the 13th July 1881 with the statement that her condition had not improved.

Shortly after the 1881 census Thomas Davies and his family move to nearby Ivy Cottage, (Ann his wife died in Abergavenny Asylum in 1903.)

There is a conveyance in 1885 from Elizabeth Fisher of Pontnewynydd and David Williams of Manachty Farm, Llanvihangel Pontymoile to Mary Grant of 4 Albert Avenue Maindee, for £132 10s for “all that messuage, cottage, tenement and 1a of arable meadow and pasture commonly called Penny Vaur or Pen-y-Carreg Vawr situated in the parish of Goytre,

In 1889 Albert Williams is registered on the electoral register as the occupier, he was born in Llanishen and lived there with his wife Hannah who was born in Llanover, their children were Mary, Sarah, Edith, and Annie.

On the 1901 census  Albert was aged 52, an iron worker, Hannah  54, Sarah 22 and a visitor called John Challenger aged 6 were registered at Cerrig Maurion. 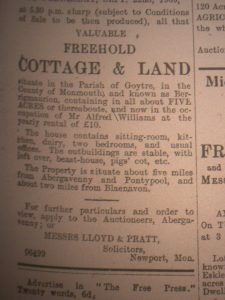 Containing about 5a in the occupation of Mr Alfred Williams at the yearly rental of £10. The house contains a sitting room, kitchen-dairy, two bedrooms, out buildings and stables with lofts over, a beast house and pigs cot and about 2 miles from Blaenavon.

The property was sold to William Williams of Far Worthen, Llanover. The gross value was £4 10s; the rateable value was £4 3s.

Alfred Williams died in August 1913 aged 74 and was buried in Llanover Church. 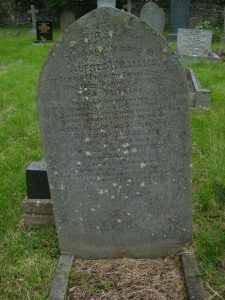 On the 1914 poor rate the owner of Cerrig Maurion is Mrs Williams and the occupier was John Lewis.

In August 1927 Annie, the daughter of John Lewis married Francis Jones, he was the 4th son of Amos Jones of Clytha.